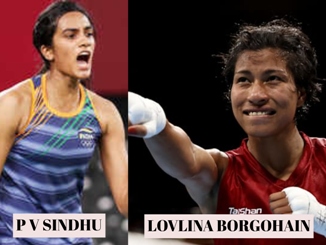 Today was a better day for India at the Tokyo Olympics. Leading the charge was boxer Lovlina Borgohain who beat Nien-Chin Chen of the Chinese Taipei 4-1 to advance to the semifinals, thus assuring India of a medal. Later, shuttler P V Sindhu made mincemeat of Akane Yamaguchi of Japan, winning the quarterfinal match 21-13, 22-20 to reach the semifinal. A medal was assured there too, but Sindhu is in sublime form and is expected to go the distance and fetch gold for India.

Coming from a small village called Baromukhia village near Golaghat in Assam, Lovlina was the cynosure of all eyes as she out-punched and out-classed Nien-Chin to whom she had lost four times previously. The judges gave a split decision in the first round but the next two rounds belonged to Lovlina as she took her revenge in the biggest sporting event. As she is up against the reigning world champion in the category, Busenaz Surmeneli of Turkey (who is in great touch at Tokyo, having won both her matches 5-0), in the semifinal, that will be one bout that will be the highlight on August 4, more so as Lovlina has said that she will get only one medal from Tokyo and that will be gold.

Sindhu, on the other hand, did not allow an aggressive Akane Yamaguchi to get on top. She defended well and took complete control of the net. Yamaguchi made too many unforced errors and had no answer to Sindhu's all round show. In contrast, Sindhu made very few unforced errors.  She is in great form and covering the court with great speed. Watching her play at Tokyo, one is sure that she will return with the gold medal.