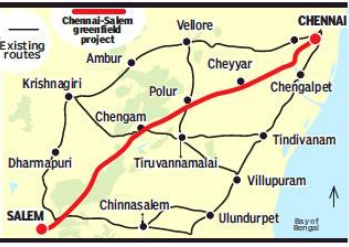 View all posts by this Author
The AIADMK government in Tamil Nadu had staked a lot on the Chennai-Salem highway but with the Madras High Court quashing the land acquisition proceedings initiated for it, the project seems doomed. The project is a very good example of how politicians junk procedures and approvals to take arbitrary decisions. The Chennai-Salem highway was never a project under the Centres Bharatmala Pariyojna. Another highway to link Chennai to Madurai had been approved. But that was junked in a hurry and the Chennai-Salem project put on the fast track.

An environmental impact assessment report is a must and is a prerequisite for any project of this scale. The project was set to pass through waterbodies, fertile farms, wetlands and reserve forests. It would have caused havoc with the environment. The supposed gain of reducing the carbon footprint by reducing consumption of fossil fuels once the transit time between the two cities was shortened due to the highway would have in no way compensated for the damage it would have caused the environment.

The Madras HC was scathing in its observations for the flouting of rules and procedures. It said that peaceful protests were stifled, unwritten gag orders were promulgated, police force was used to handle the peaceful protesters who were making a request to spare them and their lands. Calling the actions high-handed, the court said that only its intervention made the government put a stop to it. The court canceled the notification of intent issued by the National Highways Authority of India (NHAI) to acquire land for the project till a detailed environment impact assessment report was prepared.

The way governments try to push through arbitrary decisions makes it look as if they either do not know about the existence of the judiciary or do not care about it. Time and again, the courts have had to intervene when any such project is brought to their notice. With several NGOs and rights activists working for the welfare of the people now, it is high time governments realized that they have to go by the rule book or the courts will scuttle their fancy projects. A Chennai-Salem highway may be needed, but to build it, the government will have to follow the rules and not do things arbitrarily.