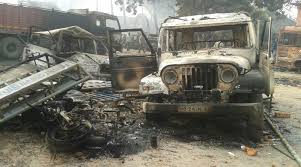 A bright, ambitious and hardworking young person with a good Diploma. Works for both print and online media. Writes in Hindi. Work appearing here has been translated from the original. View all posts by this Author
The violence that occurred in Malda in West Bengal made Mamata Banerjee say that it was not a communal issue but an altercation between the BSF and the local people. It is surprising that other parties have not protested in a befitting manner. For, attacking and vandalizing a police station is a serious matter.

Although the ground reality seems different, the police and the administration have been playing a different tune. While the violence abated after a few days, the situation remains tense and things can go out of hand.

The violence happened when the minority community was protesting against the mischievous remarks of Hindu Mahasabha leader Kamlesh Tiwari. Neighbouring Purnea, in Bihar, was also affected. Tiwari is now in custody.

A BJP âfact findingâ team was not allowed to visit the affected area. The team comprised of S S Ahluwalia, Vishnu Dayal Ram and Bhupendra Yadav. They were sent back to Kolkata from Malda station itself and not allowed to proceed to Kaliachak. A similar team from the CPIM was also stopped. The administration was of the view that since the situation was tense, such visits would make it worse.

Before this, on January 6, the police had also arrested the three member team formed by BJP president Amit Shah to take stock of the situation. They were not allowed to visit Kaliachak. The BJP wants to cash on the issue as elections are due in the state shortly.

As the angry mob had burnt a police jeep and vandalized the local police station, the BJP is terming the violence as communal while the administration is of the view that it is a law and order problem. Whatever be the reason, fact finding teams from political parties should be allowed to talk to local people and take stock of the situation.