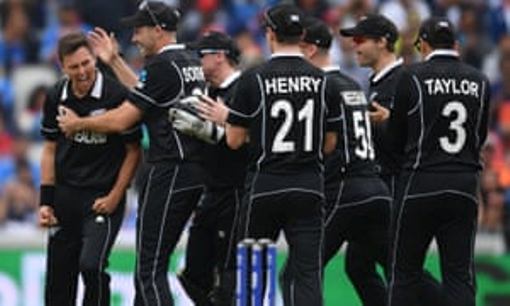 In the end, Manchester bled black as the Black Caps beat the Men In Blue by 18 runs and ended a billion dreams. Despite restricting New Zealand to just 239 runs, the Indians were outclassed by some inspired bowling by Matt Henry and Trent Boult. The match was effectively decided in the first four overs of the Indian innings when Rohit Sharma, Virat Kolhi and KL Rahul were sent back to the pavilion. The score read a pitiful 5 for 3.

The ball with which Henry got the in-form Rohit Sharma was a beauty. Rohit could do little about it. Despite trying to stay away, he got a snick that was gleefully accepted by the Kiwi wicketkeeper Tom Latham. Virat played the wrong line and was caught in front of the wickets. Although the ball hit him high on the pads and he did take a review, the third umpire decided that it was ultimately the on-field umpire's call whether the ball would have hit the stumps. The on-field umpire stuck to his guns. KL Rahul was the only soft dismissal of the three when he hung his bat at an away going delivery to give a regulation catch to Latham.

After that, it was an uphill task for the Indian middle order that has not come good in this tournament, not even against Afghanistan. Although Rishabh Pant and Hardik Patel and then, more particularly, MS Dhoni and Ravindra Jadeja did arouse hopes of a win, the run rate kept on climbing and both Jadeja and Dhoni perished trying to force the pace. Pant was looking composed and did not seem to be under any pressure. But the pressure of the mounting run rate got to him in the end and he executed a shot he should not have. Interestingly. it was the "bits and pieces" player, Jadeja, who showed how to tackle the New Zealand bowlers and almost took India to victory. Sadly, it was not India's day. In the end, they were beaten by a better team. The Kiwis bowled and fielded as if their lives depended on it and stunned India. They need to be congratulated for a hard-fought win.