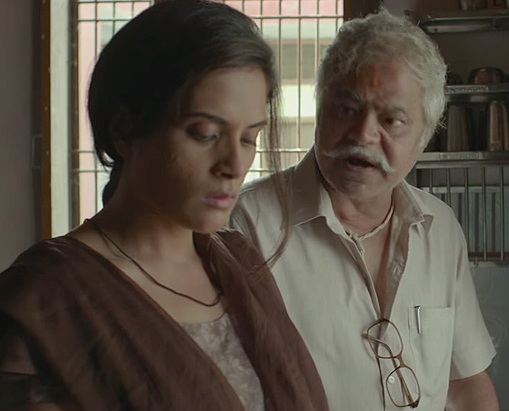 Masaan: Superb Acting by All - Go Watch It

Masaan: Superb Acting by All - Go Watch It

Editor-in-Chief of indiacommentary.com. Current Affairs analyst and political commentator. Writes for a number of publications. View all posts by this Author
Masaan is not an easy movie to watch because it shows ordinary people not trying to be heroes Ã¢â¬" they quietly accept the adverse situations and let themselves be exploited. But it is an excellent film precisely for that reason. There might be millions of Indians like Devi and Vidyadhar who do not fight back against exploitation of the kind the policeman inflicts on them. They find themselves helpless and unable to take on the corrupt system. Not that it is right, but it is a fact.

It has also given us an excellent director, three shining actors and reinforced the caliber of one as one of the finest actors we have. As Vidyadhar Pathak, Sanjai Mishra brings alive the helplessness of a father faced with the momentary indiscretion of his daughter which lands him in a financial mess. Mishra is superb in the scene where the daughter accuses him of having killed her mother. Given his talent, Mishra remains one of the most underutilized actors in the film industry.

Richa Chadha is a revelation in this movie. She had shown her mettle as Bholi Punjaban in Fukrey, but Masaan is a different ball game. As the girl who answers the demands of her body by going on a sexcapade in a seedy hotel with a student and gets caught and blackmailed by the police, Chadha is suitably restrained and gives a powerhouse performance. Throughout the film, she is torn by emotions of guilt as the boy dies after slashing his wrists. The scene at the ghat in the end where she breaks down after visiting the boyÃ¢â¬â ¢s father and letting him know that she was with him when he died is superb. First Kangana Ranaut and now Richa Chadha are proving that there is no dearth of talent. The paucity of subjects and opportunities is what is holding them back.

Vicky Kaushal as the son of the dom pursuing his mechanical engineering and wanting to escape from the burning ghats where he was born is another actor who will go far. There is genuineness in his initial awkwardness when confronted with feelings of love for a girl. He is suitably agitated when he his forced to disclose his low caste identity and dwelling place to the girl and it brings out the inner frustration perfectly. The scenes showing his grief when the girl dies and it is he who helps in burning her could have gone utterly wrong. It is a measure of KaushalÃ¢â¬â ¢s grip over his craft that he infuses them with a kind of dignity that remains with the viewer much after the film ends. Watch out for this young man.

Bhagwan Tiwari as the policeman turns in a sterling performance by eschewing bravado and mannerisms. He is utterly believable as the corrupt cop who tries to fleece a family whose daughter has been caught by him in an uncompromising situation. With the right amount of swagger, foul language and threatening mannerisms, TiwariÃ¢â¬â ¢s policeman is what you find in police stations across India and not some make believe person. Tiwari is an old hand but this performance will take him far.

Finally, in Neeraj Ghaywan, we have a director who can handle complex subjects with ease. Running two parallel stories and weaving them together can be a tricky job. To GhaywanÃ¢â¬â ¢s credit, the narrative is seamless and does not flag. It does not look bad when the protagonists of the two stories meet in the end. That their star crossed lives bring them together and they embark towards the Sangam is an apt ending to the stories. Although the film is not without its faults, Ghaywan is a name we are going to hear with increasing frequency.