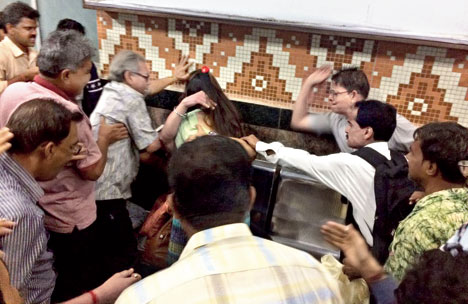 Moral Policing in Kolkata: Hugs Are Accepted Form Of PDA

Moral Policing in Kolkata: Hugs Are Accepted Form Of PDA

Editor-in-Chief of indiacommentary.com. Current Affairs analyst and political commentator. Writes for a number of publications. View all posts by this Author
A couple was thrashed in a Kolkata Metro station, ostensibly for standing too close. The picture published in the newspapers the next day showed largely middle-aged commuters with raised hands as if about to hit the guy and the girl protecting him by covering his body with her own. The girl was also not spared. The tormentors also raised cries of get a room and go elsewhere etc. It immediately destroyed Kolkatas image of being a liberal and permissive city.

Hugging is now as commonplace as holding hands or putting your arm around your partner. No one gives a second look if couples are hugging on the road. It has now become an accepted form of public display of affection. Most couples hug generally and there is nothing obscene about it. Then why did the crowd at the Metro station become aggressive on seeing the couple hug? It is not immediately clear what sparked the violence. But it did show that Kolkatans are becoming easily outraged and violent at things that they chose to take in their strides earlier. The city is no longer friendly to couples in love.

The Telegraph quoted a young student who takes the Metro everyday as saying that although these people got aggressive on seeing the PDA of a couple, they turn a blind eye if girls are harassed by louts in the Metro or elsewhere. This shows that the crowd always picks on the weak and the vulnerable. They know that the couple will not retaliate, so they hit them. But when a lout harasses a woman, the crowd melts away as they do not know whether the rowdy, who has the courage to harass a girl, carries a weapon or if he has friends nearby who might hit them back.

Although the Metro issued a notification calling for passengers not to tarnish Kolkatas cultural heritage, it did not specify who it was pointing at, the couple for their PDA or the crowd for hitting them. Meanwhile, couples all over the city decided to hit back at the moral policing in a unique way. About a 100 of them assembled at the Tollygunge Metro station and hugged publicly carrying placards that said #hokalingan or let the hugs flow after an event was created by a youngster on Facebook. Hitting young couples in love for PDA is outrageous in a city that once boasted of a lovers lane. Moral policing must stop. The couples know their limits and they must be given space.