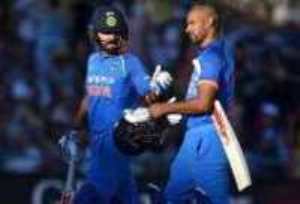 Napier ODI: Bizarre Stoppage No Hurdle For The Indian Team

Napier ODI: Bizarre Stoppage No Hurdle For The Indian Team

Holding an extreme view and carting the ball out of the park is what interests him most. He is a hard hitter at all times. Fasten your seatbelts and read. View all posts by this Author
India crushed New Zealand by 8 wickets in the first ODI of the five-match bilateral series. But more than the performances, it was the bright and dazzling sunlight that hogged the limelight. As the sun was about to set, it let off rays that made it impossible for the Indian batsmen to see the ball. So for the first time in the history of international cricket, there was a stoppage for extreme sunlight. We have seen stoppages for rain, poor sunlight, ball going out of shape, players getting injured, failures of light towers and hooliganism, among other reasons. But this was the first time the Sun shone so brightly that the players found it difficult to see the ball.

Cricket pitches worldwide are placed in the North-South direction to avoid this. But the McLaren Park pitch in Napier is placed in the East-West direction. Local matches have been disrupted earlier too for the brightness of the sun, but this was the first time an international match was stopped for this. Indian captain Virat Kohli said never in my life when asked whether he had faced such a situation before.

The match once again showed the clinical precision which the Indian team has acquired to demolish the opposition on all kinds of surfaces and in all conditions. Before the match, it was being said that New Zealand, backed by their recent performances, were the team to beat. It was being pointed out that India beating an Australian team without Steve Smith and David Warner and India taking on a full strength Kiwi team was a different proposition altogether. But the way the Indians decimated the Kiwis, it seems that they have become unstoppable in the ODI format. For the record, the Kiwis won the toss and chose to bat. They were bowled out for 157, with Mohammed Shami taking 3 wickets and Kuldeep Yadav four. In reply, India achieved the revised target (under D/L method) of 156 losing just 2 wickets, with Shikhar Dhawan top scoring with 75.