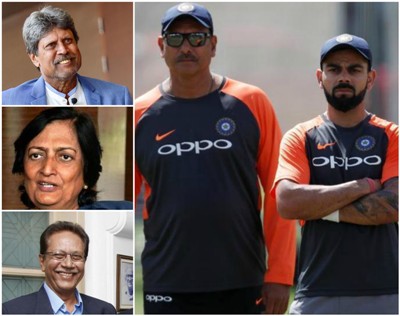 Is it time to bring fresh ideas and fresh coaching methods by replacing the head coach of the Indian cricket team? Or will it be better to let Ravi Shastri remain in the saddle to ensure continuity before a packed calendar that includes the ICC Test Championship cycle and the One-Day Championship cycle, apart from the 2021 T20 world cup? This is the moot question before the Cricket Advisory Committee (CAC) comprising Kapil Dev, Anshuman Gaekwad and Shanta Rangaswamy, tasked with selecting the man who will occupy the hot seat for the next two years.

One feels that after two years of Ravi Shastri, fresh ideas would be welcome but not at the cost of disturbing the mental state of the team. If Virat Kohli says that the team backs Shastri, obviously he is not speaking only for himself but the entire team. Although CAC member Anshuman Gaekwad has said that Virat Kohli's comments will not influence the committee, there is no doubt that if there is no tuning between the captain and the coach (remember the unsavoury incidents when Chappel-Ganguly and then Kumble-Kohli could not hit it off), there will be infighting in the team and performance will suffer.

The BCCI obviously has pre-defined standards and it will definitely ask the CAC to evaluate the team's performance under Shastri against those standards. Since the CAC has three stalwarts they are not likely to be swayed by sentiments, but since all of them are ex-players they also know the qualities needed to manage a dressing room as complex as that of the Indian cricket team. If Shastri is found to have delivered, there is no harm in retaining him. It is not a secret that a happy team performs better. So if the team is happy in having Shastri, and if he meets the BCCI standards, he should be retained.