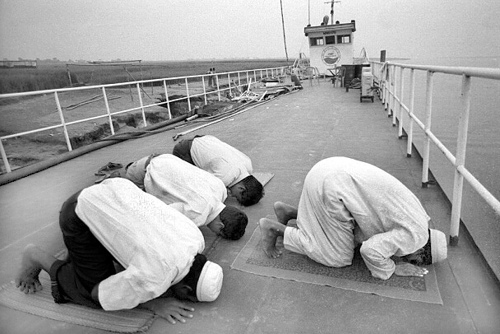 Not Mandatory For Muslims To Pray In Mosques or Idgahs

Not Mandatory For Muslims To Pray In Mosques or Idgahs

Editor-in-Chief of indiacommentary.com. Current Affairs analyst and political commentator. Writes for a number of publications. View all posts by this Author
It is a strange facet of governance in India presently that instead of taking to task those who disturb public peace and harass a community, questions marks are raised about the practices being followed by the community that is targeted. When the Hindutva mobs attacked Muslims offering namaz in open places in Gurugram, they were trying to disturb public peace. They raised mischievous slogans like Bangladeshi wapas jao etc. that had the potential of instigating riots. Instead of rebuking them and asking the police to round them up, chief minister Manohar Lal Khattar chose to say that namaz should be offered in mosques and idgahs instead of open public places, as if those offering prayers were the ones who were committing a crime.

There are two things that are relevant to the situation. First, the administration was aware that some Muslims offer prayers in the open. Did it ask them not to do so? Was any circular issued banning offering of prayers in open spaces? If not, then those offering the prayers were not in the wrong. Second, those who attacked them belonged to a Hindutva outfit. Did the government not receive any intelligence input that they were planning such an attack? If not then this is a serious intelligence failure. If yes, then why didnt the administration prevent it? Was it waiting for them to strike so as to create pressure on the Muslims to force them not to offer prayers in the open?

The BJP governments ruling in the states should recognize that Muslims constitute nearly 18% of Indias population and cannot be wished away to Pakistan or Bangladesh. They are as much Indias citizens as Hindus. If some of their practices are not as per public policy or cause disruption of life for other citizens, the government must sit with bodies representing the Muslims and work out a formula to ensure both: the religious freedom of the Muslims which includes the right to offer prayers and avoidance of disturbance to other citizens. If need be certain open public places can be earmarked for offering prayers. But allowing miscreants to attack those offering prayers is not governance, it is hooliganism.