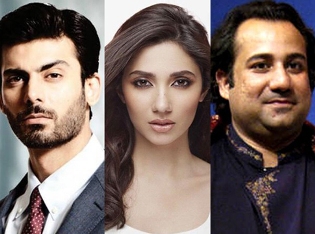 Do Not Support Pakistani Artistes Now

Do Not Support Pakistani Artistes Now

Editor-in-Chief of indiacommentary.com. Current Affairs analyst and political commentator. Writes for a number of publications. View all posts by this Author
Salman Khan has also jumped on the wagon of supporters of Pakistani artistes working in India. All those indulging in this have some standard responses as follows:

1. Artistes are not terrorists
2. Banning artistes will not solve the problem
3. People to people contact with Pakistan should be maintained
4. The government has given them visa and allowed them to work
5. Talent from anywhere should be respected

No one is saying that artistes are terrorists. But they come from a country that is breeding and sending terrorists to India to cause destruction. It is not the fault of Pakistani artistes that their country is doing this. But they can at least condemn such attacks. Zee TV supremo and MP Subhash Chandra is on record as having said that he called up all Pakistani artistes working in India and asked them to condemn the Uri attack without naming Pakistan if they wished. But none of them did so. Now if their country of origin continues to kill our soldiers and citizens and if Pakistani artistes working in India do not have the sensitivity or the courage to even condemn these attacks, one think they have no business to earn their living here. Indian Motion Picture Producers Association (IMPPA) has already passed a resolution to ban them.

Artistes are said to be sensitive people. It is out of sensitivity that Indian artists are defending Pakistani artistes working in India. But by not condemning the frequent terrorist attacks on India, Pakistani artistes have shown they have no sensitivity left and are here only to earn better than what they can do in their own country. Another big reason for not allowing them to work in India is that the arrangement in not reciprocal  no Indian artist will ever be allowed to live and work freely in Pakistan. So why should we always display one-sided friendship. This makes us soft and spineless in the eyes of the Pakistani establishment. Further, it is also an insult to the martyrdom of our brave soldiers that we continue to pay absurd amounts to Pakistani artistes for ordinary work that can be done by any Indian artist and shower them with love and affection without any compelling reason other than commerce.

The Pakistani artistes working in India keep harping that they get immense love and affection anywhere they go in India. Indian artistes have also vouched that they get similar treatment in Pakistan. Then why are Pakistani artistes not in the forefront of building up public opinion in favour of India in their country. At least Indian artistes try to build public opinion in favour of Pakistan by saying that the people of Pakistan are like the people of India and like they are now doing by supporting Pakistani artistes. But whatever they say in India, Pakistani artistes cannot utter a word of praise for India once they are back in Pakistan because the likes of Hafiz Saeed will eliminate them pronto. Or they will be branded India-lovers, lose their fan following and face social taunts.

This support for Pakistani artistes to stay and work in India is based on two major premises: one, that sending them back will not solve the terrorist problem and two, they are here on Indian visas and stay here because the government has allowed them. People must realize that people to people contact with Pakistan has failed. For so many years, we have allowed these artistes to work in India. Have the terror attacks subsided? In fact, they have increased. So if allowing them to work here has not solved the terrorist problem, let us give banning them a try. In strategic warfare, this is one of the options  sending back nationals of unfriendly nations. I am sure people in Bollywood are not aware of this. The government should cancel their visas and send them back. If the government had given them visas, the government will cancel them. Bollywood should display sensitivity towards our soldiers and respect public opinion by not supporting Pakistani artistes. They should be allowed back only when there is a reciprocal arrangement whereby Indian artistes are also allowed to work freely in Pakistan (although one is sure not many will like to work there). Love, affection and friendship cannot be one-sided.