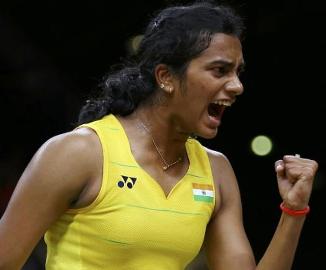 P V Sindhu: Not Her Day, Despite Being Better

P V Sindhu: Not Her Day, Despite Being Better

Editor-in-Chief of indiacommentary.com. Current Affairs analyst and political commentator. Writes for a number of publications. View all posts by this Author
Despite being the better player on view and having the better of most crucial exchanges, P V Sindhu had to settle for silver in the final of World Badminton Championship. It is heartbreaking to lose a final, more so when you have put your heart, soul and all that you have learnt over the years in those nearly two hours. But Sindhu may rest assured that despite the loss, she has proved that she is no less a champion than the eventual winner, Japans Nozomi Okuhara.

As Sindhu rightly pointed out, the unforced error she committed at 20-20 in the deciding game changed everything. Before that, the game  which panned out like a thriller  was evenly poised. But once Okuhara went 21-20 ahead, she went for the kill and sealed the game. Sindhu said she is upset. As a sportsperson, she is right in being upset for letting the gold slip out of her hand. But all of India is proud of her. She played like a tigress.

The best rally in the game lasted all of 73 shots. There were more such rallies. Scotlands Kirsty Gilmour tweeted that this must have been one of the best matches in history. Others called it nail-biting, incredible and breath-taking. It was no doubt an epic match. Here were two ladies displaying the best of badminton in the title match of the World championship. One had to lose. Sadly, it was not Sindhus day. But champion she remains and will definitely come back stronger in the next edition.

Sindhu's performance, and that of the other champion Saina Nehawal (who won bronze after losing in the semis) shows that Indian girls have now acquired the will to win and imbibed the quality of withstanding pressure - the main thing that separates true champions from rank and file sportspersons. The way Sindhu matched Okuhara shot for shot and point for point was a treat to watch. This generation of sportspersons in India has immense self-belief. They supplement it with rigorous training and put in a lot of hard work. It is just a matter of time before, despite the bungling bureaucracy and the corrupt associations, Indians will share the podium with the best in the world in many sports disciplines.