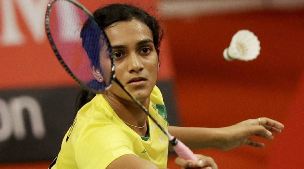 P V Sindhu's Silver is as Good as Gold

P V Sindhu's Silver is as Good as Gold

Editor-in-Chief of indiacommentary.com. Current Affairs analyst and political commentator. Writes for a number of publications. View all posts by this Author
Some sports persons, despite being excellent in their field, live in the shadow of their equally talented and marginally better compatriots who perhaps have better control over their nerves and perform well in tournaments across the world. When the Indian cricket team was blessed with a surfeit of spinners, Padmakar Shivalkar, despite being the top wicket-taker year after year in domestic tournaments, had to sit out. Even within the famous four, S Venkatrahgvan often had to cool his heels on the bench as Erapalli Prasanna was preferred. P V Sindhu was facing a similar fate as Saina Nehawal did full justice to her talent and upped her game in important tournaments to bring laurels to the country. Sindhu, despite being equally talented, somehow lagged behind. Hence, she remained in the shadows of her more illustrious compatriot.

Rio Olympics has changed all that. When an injured Saina (she is to undergo an operation on her knee and will be out of action for most of September) crashed out early, losing to a low-ranked opponent, Indias hope of a medal in badminton seemed dim. But this time, Sindhu raised her game  and attitude  to a level not seen from her till now and showed the world what she is made of. On her way to the final, she beat Wang Yihan (world number 2) of China in the quarterfinals and Nozomi Okuhara (world number 6 and reigning All-England champion) of Japan in the semifinals. Both these victories were emphatic and achieved through sheer talent and loads of grit. Although she lost to Carolina Marin (world number 1) of Spain in the finals, the way she played and the way she took the first game despite being 17-19 down in the end spoke a lot about her approach. Carolina Marin raised her game to an unprecedented level in the second and third games but Sindhu fought tooth and nail. In the end, the better player won but Sindhu showed that her appearance in the finals was not a fluke. She richly deserved the silver she won.

There is a huge difference between Saina and Sindhu despite both of them being hugely talented. Saina is like M S Dhoni in her temperament and coolness and likes to wear down opponents with long rallies. Sindhu, on the other hand, uses her height and power to great advantage to smash her opponents out of the court. But attacking power play can sometimes misfire and Sindhu has lost a lot of matches in the past for her inability to slow down a game when her opponent was continuously winning points. But at Rio, Sindhu showed that she, and her coach Pullela Gopichand, had worked on the chinks in her armour. Two rallies in the finals showed how far she has travelled from the days when she could not handle back of the court play and was poor at retrieval. It augurs well for India that Sindhu is finally emerging from Sanias shadow. Isnt it always better to have two shuttlers vying for gold? After Rio, Sindhu will be a feared opponent in all tournaments.