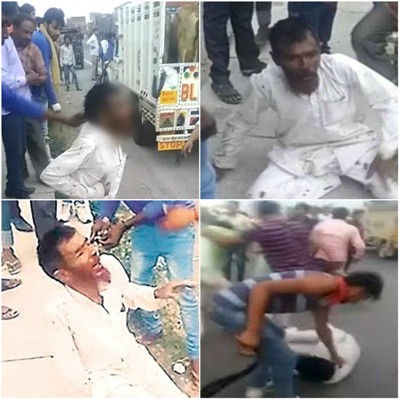 All trials involving terrorism and lynchings by Hindutva elements are playing out as per a grand script. The prosecution botches up the case and the judge has no alternative but to throw up his hands in the air and acquit the accused. The same has happened in the Pehlu Khan lynching case. All 6 'accused' have been acquitted for 'lack of evidence'. It is not upon the judge to play executioner. He or she is there just to apply the law as per the evidence produced in court. It is upon the prosecution to build a water-tight case based on the evidence collected by the investigating agencies so that the accused, if he, she or they are guilty, do not escape punishment. In the instant case, there was clinching evidence in the form of a video clip that showed Pehlu being attacked and beaten by several people. The hospital confirmed he died due to the injuries sustained in the attack. Two plus two should make four, but if investigating agencies and the prosecution are compromised, in India two plus two can add up to any number.

If we consider the way the prosecution handled the case, it becomes clear that the intention was to subvert justice. Pehlu Khan had named 6 persons in his dying declaration. None of the persons now acquitted were among them. Those six had already been exonerated by the investigating agencies in the final chargesheet filed in September 2017. As an observer of the practice of law, one believes that a dying declaration is a very important piece of evidence and those named in it must always be brought before the court. Instead, the present six accused were plucked from thin air and a case was started against them. The clinching video could not prove that these six persons were indeed present at the scene of the crime, which it obviously could not have if these six were being framed to confuse the court and subvert justice. The judge acquitted them by giving them the benefit of the doubt.

While the courts generally follow the Blackstone ratio which says "it is better that ten guilty persons escape than that one innocent suffer", there are times when the courts can do both, not let an innocent suffer and yet punish the guilty. In this case, if the dying declaration was produced in court as evidence, the court could have insisted that those named in it should be charged instead of going by the chargesheet that gave them a clean chit. Who were the investigating agencies and the prosecution to decide they were not guilty? Further, if the video was produced as evidence, could not the prosecution ensure that the assaulters were identified and arrested? They were not outsiders but local people from the area where the crime took place. It would not have taken a monumental effort to do so. But perhaps the will was absent.

The BJP was in power in Rajasthan when the crime took place. It was one in a series of crimes being committed across the country by the so-called cow vigilantes. The administration had tried to play down the incident until the lynching video surfaced, causing outrage all over the world. After that, it was quick to act and several arrests were made. But the decision by the court clearly shows that it was eyewash. The intention was always to let the accused go free. But the Congress government under Ashok Gehlot must also share a part of the blame. The Congress had made the Pehlu lynching a big issue by protesting against the then BJP government of Vasundhara Raje Scindia. It came to power in the state in December 2018. More than six months have passed since then. Why didn't the present government ensure that the prosecution treated the case in a manner different than how it was being done under the previous government? One is of the opinion that nothing positive will come out in the appeal which the Rajasthan government is thinking of filing because if the persons acquitted now were being framed to shield the real accused, the higher court will also acquit them. The Gehlot government should bring the real culprits to trial if it is seriously interested in pursuing the case and ensuring justice for Pehlu Khan.