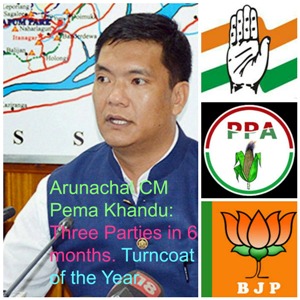 Editor-in-Chief of indiacommentary.com. Current Affairs analyst and political commentator. Writes for a number of publications. View all posts by this Author
Arunachal Pradesh must have set some sort of a record for political flip-flops within a short period of time. The latest defection of sitting chief minister Pema Khandu to the BJP with 33 other MLAs of the Peoples Party of Arunachal is just the culmination of political machinations that started with the breakdown of the Congress government led by Nabam Tuki in January 2016. Since then, the state has seen a change of government five times, with Pema Khandu being CM three times under different parties. Khandu must be voted the turncoat of the year for his impressive feat. In between, the government of Nabam Tuki was restored (ironically, he could rule for just 5 days before internal politics of the Congress party placed Khandu in the chair) on the orders of the Supreme Court and a deposed chief minister, Kalikho Pul, was found dead under mysterious circumstances.

If this is what the legislators of Arunachal understand by democracy, one thinks they need a crash course in the subject. They have made the state lose one full year of development as there was no real government in place for any decent length of time. As it is, Arunachal is famous for being one of the most corrupt states in the country where the cost of every development project is hugely inflated to siphon out absurd sums of money. Only connections work here and tenders are cooked. Hence, legislators must be changing colours frequently to maximize gains.

With China getting adventurous and belligerent, it is absolutely necessary to have a stable government in a frontline state like Arunachal. While the Congress is of the opinion that the BJP fished in troubled waters to create the original breakdown of Nabam Tukis government, the fact is that insulting treatment meted out to state MLAs by Rahul Gandhi was the main reason why Congress lost the state. Since the BJP has now taken charge of the government, it must ensure that there are no more flip-flops and the state progresses. There are many military and civil projects that are pending for a long time. Given Chinas territorial designs on Arunachal, these projects must now be completed as fast as possible to allow the armed forces to give a befitting reply to any incursion China might attempt.