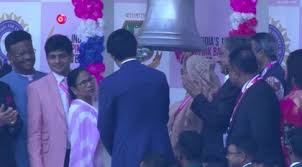 The first day of the first-ever day-night pink-ball Test match in India belonged to the Indian team and Saurav Ganguly, the president of the BCCI. Ganguly, instrumental in convincing skipper Virat Kohli to play with the pink ball, turned the match into a ceremonial occasion with the chief minister of West Bengal, Mamata Banerjee and Bangladesh Prime Minister Sheikh Hasina in attendance. Also in attendance were a galaxy of former Indian greats, both men and women, and other sports personalities who were taken around the ground in laps of honour in battery-operated vehicles. The Eden Garden area and most monuments in Kolkata were bathed in pink light for the occasion.

The Indian team made mincemeat of the visitors by skittling them out for just 106 runs inside two sessions. Once again, the Indian pacers made the most of a green top. Ishant Sharma, who took five wickets, was the pick of the three but Mohammed Shami was not far behind. Umesh Yadav, though he took three wickets, was wayward, allowing the batsmen to hit him for boundaries.

The best thing was that the pacers were backed by superlative efforts in the field. First, Rohit Sharma took an absolute blinder to dismiss Mominul Haque. People on twitter called him "superhero" for his brilliant effort. But Rohit had competition. Just a few minutes later, wicketkeeper Wriddhiman Saha surpassed him with a diving catch that was stupendous. The Indians were incredibly athletic on the field.

The Bangladesh batsmen, on the other hand, displayed poor technique and even poorer application. Big match temperament was absent in almost all the batsmen and they did not know what to do in the face of some extremely accurate and hostile bowling from the Indian pacers led by Ishant Sharma.

The hosts started well but were pegged back when Indore double-hundred maker Mayank Agarwal was dismissed early. Then, Rohit Sharma was surprised by an incoming delivery from Ebadot Hossain. He shouldered arms but was caught in front of the wickets. The review showed the umpire was right in giving him out. After that, 50's from Cheteshwar Pujara and Virat Kohli took India ahead and at stumps, Rahane was giving good support to Kohli who played some majestic shots to arouse hopes of a long innings tomorrow.