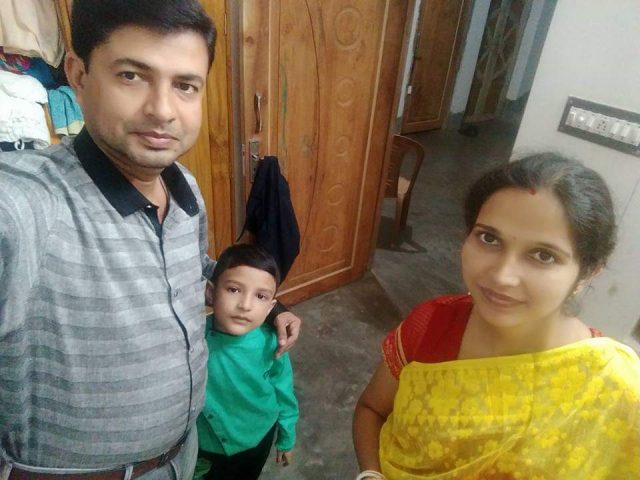 In a gruesome incident, a man, said to be an RSS sympathizer, his pregnant wife and their 8-year old son were brutally murdered in their home in Jiaganj in Murshidabad district of West Bengal. Schoolteacher Bandhu Prakash Pal, 35, his pregnant wife Beauty Pal and their 8-year old son Angan were found lying in a pool of blood by the milkman who pushed open the unlocked door when they did not answer the bell.

It is difficult to say whether there is a political motive behind the murders. The police have yet to come to a conclusion. Inquiries with the local unit of the RSS have revealed that Pal had started attending their weekly 'milan' programmes for the last few months but was not a registered member and did not actively take part in other events of the organization. By that token, he could not have made enemies purely on political affiliations.

But such is the atmosphere of mistrust and hatred in West Bengal on either side of the political spectrum that even visiting the opposite camp for get-togethers can invite punitive action from the other side. Hence, nothing can be ruled out definitely. But the gruesomeness of the crime and the fact that the assailant murdered the whole family indicates that there might be a revenge angle to the crime, although the neighbours did not speak of Pal having any enemies.

The murders have once again brought the West Bengal Governor, Jagdeep Dhankhar, in direct confrontation with the Mamata Banerjee government. The Governor said that the incident had "shocked the conscience" and was "reflective of intolerance and worrisome law-and-order situation". He also urged the state police to probe the incident in a "fair-minded manner with an eye to book the culprits, uninfluenced by other considerations". The TMC was quick to respond. The party secretary-general Partha Chatterjee alleged that the governor was reacting to incidents in the state "selectively". He said that the governor was giving a political angle to an incident that happened due to "family discord".

Both parties should not let politics come in the way of a fair probe. The brutality of the murders demands that the culprits be traced and brought to justice. Whatever be the motive of the murderer or murderers, a pregnant woman and a child were also killed (and this has prompted the chairperson of the National Commission for Women (NCW) to write to the state government for a fair and expeditious probe) and the police must speed up the probe.