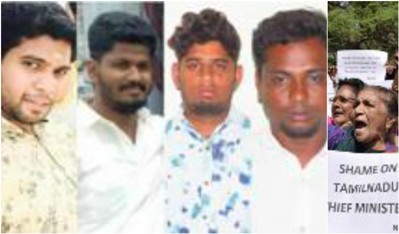 By our team of in-house writers. View all posts by this Author
Pollachi is a small town in the Coimbatore district of Tamil Nadu. It has been pitch forked into the limelight due to the sexual assault and blackmailing cases coming out. A gang of four men, two of whom were highly educated, targeted girls on social media, befriended them, took them to hotels and for long drives to sexually assault them, record the incidents and later blackmail them for money or further sexual favours.

Although one girl has complained till now, many others have narrated their experiences on police help lines without actually having the courage to lodge a complaint. The police have arrested the four. The case has assumed political overtones with AIADMK suspending one worker for intimidating witnesses. The state government has asked the CBI to take over the investigations amid opposition charge that it was suppressing facts in the case.

But the biggest fallout from the case has been the clamp down on girls in the town. Wary parents are stopping them from attending colleges or otherwise going out. They are being asked to study from home through correspondence courses. They are also being denied the use of mobile phones and social media. There are reports that people are not willing to marry any girl from the town.

Why it is that the Indian society always victimizes the victim? If anything, the clamp down and the strictures should be on boys as they were the ones who exploited the girls. Why cant girls live normal lives and have to be the subject of parental scrutiny at all times while boys can do whatever pleases them?

The CBI must find out whether the charge that the boys were working for others is true. It must find out if there was a conspiracy behind the racket. It must build up a tight case so that the perpetrators do not escape punishment. Justice for the exploited girls must be full and swift.