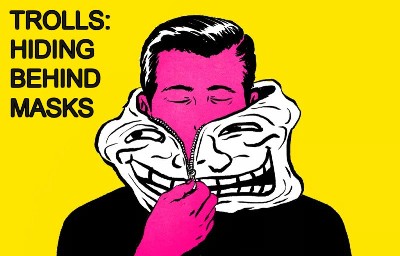 Trolls: Time To Unmask Them

Trolls: Time To Unmask Them

By our team of in-house writers. View all posts by this Author
People are talking about the increasing incidents of trolling. People have begun to ask whether there are professionals who only job is to go after people for various things. The month of June saw minister of external affairs, Sushma Swaraj, being viciously trolled for the transfer of a passport officer who misbehaved with an inter-caste couple and denied them passports. Then trolls threatened to rape the minor daughter of Congress spokesperson Priyanka Chaturvedi. People commend her for approaching the police to lodge a complaint, who have initated action. Earlier, Priyanka Chopra was trolled for taking up the cause of Rohingya refugees. These are just three examples but trolling is happening on a daily basis and people say is getting more vicious and intolerable. People say they are fed up with these vermin who hide behind the anonymity of social media to attack people. People also say that ignoring the trolls only emboldens them and victims should follow the example set by Chaturvedi.

People are saying that freedom of speech does not include freedom to abuse or issue threats. People say that social media should be the platform for civil public discourse where when can read different points of views on a subject and interject with ones own views. People say it should be the place to enrich ones knowledge and meet people. Instead, they say, it is turning out to be the place to learn newer abuses and newer ways of threatening people. People say this should not be allowed to go on. People argue that despite anonymity, these people should be booked under the IT Act by zeroing in on the IP Address from where these messages emanate. People say that the cyber crime wings of all state police forces should be proactive in this regard to weed out habitual offenders. People are also saying that if need be, a Central cyber crime unit dedicated to trolling can be set up to curb the menace.