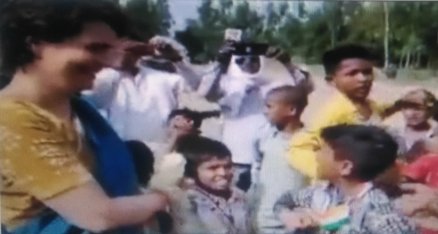 Holding an extreme view and carting the ball out of the park is what interests him most. He is a hard hitter at all times. Fasten your seatbelts and read. View all posts by this Author
In just two days, Priyanka Vadra has slipped from being a supposed asset to the Congress party and has turned into an embarrassing liability. First, she spoke of the party fielding weak candidates in UP that were not expected to win but to cut into the BJP votes. Then a video started doing the rounds which showed her among children from 5 to 12 years who were hurling filthy abuses at Prime Minister Modi in the garb of election sloganeering and finally another video showed her playing with a snake in the course of her campaigning.

It is often seen that small parties or influential individuals file their nominations to bargain something from the bigger parties as the latter would fear that they would cut into their votes. But it is for the first time that a leader of the stature of Priyanka Vadra has said that the Congress has fielded weak candidates in some constituencies of UP to help the SP-BSP alliance by snaring away BJP votes. This is in direct contrast to what Rahul said after being snubbed by the alliance. He had said that the Congress will fight with all its might in all 80 seats of the state. It is shameful that the Congress could even talk about it, let alone do it. Akhilesh Yadav rightly said that he refused to believe what she said.

Her video with children was obnoxious. Even if Priyanka was a novice and did not know the law, those with her must have been seasoned politicians and should have known that the law did not permit using children in political campaigns. Those children were tutored to hurl abuses at the Prime Minister and chowkidar chor hai was the least offensive abuse they were using. The National Commission for Protection of Child Rights has rightly complained to the Election Commission about the use of children in campaigning. Smriti Irani has also rightly warned mothers of trusting their children with Vadra she allowed children to hurl abuses that cannot be repeated here.

Finally, the video with the snake also shows that Vadra is not aware of animal protection laws which ban ownership of snakes and prevent charmers from using snakes for their shows. That Priyanka thought she was being part of a daily tamasha that unfolds on Indian streets is sad. She has a lot to learn and the process will be from bottom to up. Starting with a celebrated family name and immediately getting a licence to have a go at Modi is only going to help in a limited way. Other things will also count but Priyanka seems to be having fun without worrying about the consequences.