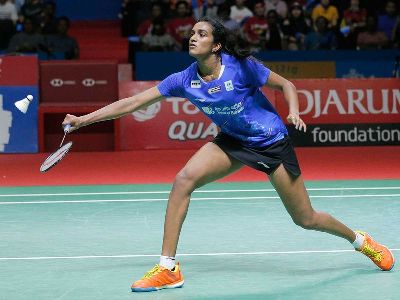 PV Sindhu And Tournament Finals: Not Made For Each Other

PV Sindhu And Tournament Finals: Not Made For Each Other

Is P.V. Sindhu scared of tournament finals? The way she stumbles at the last hurdle would definitely point to having a thing about them. The latest loss came against Akane Yamaguchi of Japan in the Indonesian Open. Since losing to Carolina Maria in the 2016 Olympics final, Sindhu has won just five titles while finishing second best 11 times. When one starts losing so many finals, the opponents notice. They start planning differently and add to Sindhu's misery.

Take the Indonesian open, for example. On any given day, Sindhu would be expected to beat Yamaguchi hands down as she has a 10-4 career advantage over her. But that day, Yamaguchi changed her plans. She knew of Sindhu nervousness in finals and transformed herself from a baseline rally player to an attacking smasher. This threw Sindhu completely off guard and before she could think of anything, Yamaguchi smashed her way to a 21-15, 21-16 victory. It was a planned demolition to which Sindhu had no answers.

There is no doubt Sindhu is a great player. But there is a big gap in being great and an all-time great. She would definitely not want to be remembered as someone who used to finish second best. She has the ability to put it across any player on the circuit. Then why does she falter in the finals? Is it psychological? Or is it about not having a plan B or plan C in place?

But whatever it is, modern sport has become a team game even though it is the individual who performs on the court. Hence, Sindhu has the resources of a coach, a physical trainer and perhaps a mental trainer, among other support staff. If the mental trainer has not succeeded in lifting her up in the last three years, it is time to change him or her. There are many distinguished persons in the field who have transformed the careers of many sportspersons. Sindhu must approach one of them. She should immediately seek advice to get results that are on par with her talent and ability.