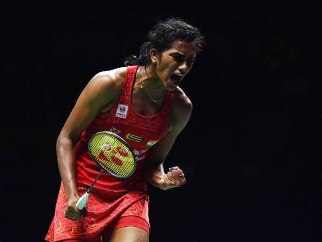 Linus tackles things head-on. He takes sides in his analysis and it fits excellently with our editorial policy. No 'maybe's' and 'allegedly' for him, only things in black and white. View all posts by this Author
PV Sindhu is a fighter. She is also a big tournament player. Both these qualities were on display in abundance in the semifinals of the BWF World Championships. (The news at the time of writing this article is not good  Sindhu has lost the final to Carolina Marin). She fought like a wounded tigress in both the games after trailing by huge margins to beat her Japanese opponent, Akane Yamaguchi.

Sindhu trailed 0-5 and 4-8 in the first game as Yamaguchi made a flying start, hoping to catch the Indian on the wrong foot. But Sindhu put her head down and displayed tremendous grit in coming back strongly. She won the first game 21-16.

The second game saw Yamaguchi race away to a 19-12 lead and was just two points from winning the game. The Japanese girl discovered a weak point in Sindhus game  net dribble on the backhand court. She won two points there and looked at her coaches with an unbelievable school-girlish glee, as if to say see how I can beat her. But that overconfidence and happiness were her undoing. After Sindhu reduced the gap, Yamaguchi made it 21-20 and was just a point away from the win. At that stage, she made an error even a school girl would be ashamed of  she served on the wrong side of the court.

Sindhu quickly closed the match 24-22 and entered the final for the second straight year. Although she trails Marin in career record and had lost to her in the Olympics, she had beaten her in June in the Malaysian Open. But Marin is playing in an uncharacteristically fast and furious manner in this championship. Her game plan seems to be to bamboozle opponents. Sindhu has to watch out for this new Marin in the finals.