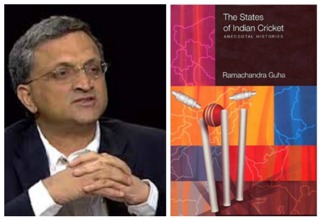 By our team of in-house writers. View all posts by this Author
People are talking about the appointment of historian and cricket writer Ramchandra Guha on the BCCI administrative panel by the Supreme Court. Twitter is having a field day, with people twisting words to poke fun at him.

When Gajendra Chauhan was appointed as chairman of FTTI, Guha had questioned his competence. Now Twitterati is making him recall those words and is questioning his own competence to be on the BCCI panel.

Paresh Rawals parody (@Babu_Bhaiyaa) account wrote:
Respected Ramchandra Guhaji was asking for Gajendra Chauhan's qualification and skills when he was chosen the chairman of FTTI... and now Ranchandra Guhaji happily accpeted post to head BCCI... becauase Ramchandra Guhaji played a very important role when India won World Cup and T20 World Cup..he was helping Indian cricketers on field..just like Naseeruddin Shahji did in film Chamatkar..Though normaol ppl couldn't see him as he was invisible..but Nehruji was watching him and blessing him...

Some of the more colourful tweets go thus:

@greatbong wrote:
With #RamGuhainBCCI Nehra is one vowel away from captaincy.

@DOCTORATLARGE wrote:
Ram Guha is made BCCI administrator because he writes on cricket. So, since Chetan Bhagat writes on sex, he should be made a gynaecologist

People are saying that since Guha had talked about competence in case of Chauhan, he should have declined the Supreme Court offer on the plea that he was not competent enough to be on the BCCI panel. But such is the allure of being in a panel to run the richest cricket body in the world that Guha could not resist the temptation.

People are talking about the ease with which people who show righteousness and indignation at supposed wrongs change stance when they are themselves committing a wrong. People say that Guha will now make righteous remarks about how he has got an opportunity to serve the game he loves and has been writing about and how he is not letting to go of the opportunity to contribute and make a difference.

But people are saying that in accepting the post, Ramchandra Guha has shown that he is a huge FAKE.