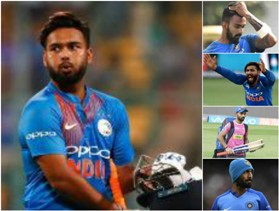 World Cup Squad: Will They Make It?

World Cup Squad: Will They Make It?

Priyanka is a sports enthusiast and writes on cricket, tennis and badminton. View all posts by this Author
The BCCI will announce India's squad for the upcoming ICC mega event, the Cricket World Cup, on April 15. According to skipper Virat Kohli, the World Cup squad is almost sorted out with a decision on just one spot remaining. The main position in the Indian team is No 4 spot which was widely discussed in the past months and now all eyes will be on the selectors as to who they will pick or bank on for the much-discussed position.

Ahead of the selection day, here are some players whose selection will surely surprise you:

KL Rahul
It is certain that Shikhar Dhawan and Rohit Sharma will be the openers for India at the World Cup. But KL Rahul could be picked up as a back-up opener. Rahul doesn't have a great record in England but looking at his current form, he can be a good option for the opening spot. If India adds Rahul in playing XI, then he could bat at No 3, while skipper Virat Kohli might drop to No 4.

Ajinkya Rahane
The right-hand batsman is a good option for No 4 position. Rahane's inclusion in Team India at the World Cup could make the Indian team even stronger. Rahane has a good record in England and his inclusion will also offer an extra option for the opening position.

Dinesh Karthik
Dinesh Karthik could be a surprise addition as third wicketkeeper-batsman. Karthik has been part of the Indian team for last few series; however, he didn't get a chance against Australia. Rishabh Pant was added in place of Karthik but he disappointed against the Aussies and this could give Karthik an upper hand to be part of the Indian team. But with the buzz around Pant growing louder, this is one spot the selectors would be discussing threadbare.

Ravindra Jadeja
Jaddu, as he is fondly called, has been integral part of the Indian team for many years. His inclusion gives team a balance. Jadeja is one of the best fielders in the world and is also very handy with the bat. He has been part of Indian team in big tournaments and looking at his performance, his inclusion is surely on cards.