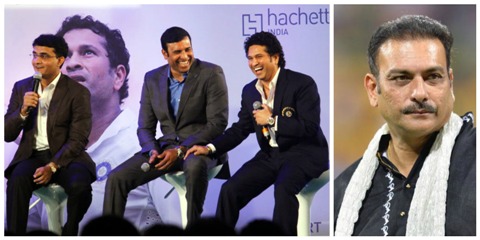 Editor-in-Chief of indiacommentary.com. Current Affairs analyst and political commentator. Writes for a number of publications. View all posts by this Author
Ravi Shastri has started creating controversies even before assuming office as the head coach of Team India. Not satisfied with Zaheer Khan as bowling consultant, he wants to bring Bharat Arun on board. He says he is entitled to have the support staff he needs to effectively coach the team. He has put forward the logic that Zaheer Khan will not be available all through and preparations will suffer.

Obviously Shastri has the good of Indian cricket  and Team India  at heart when he says this. But the manner in which it was leaked to the media despite his nod in Zaheers appointment shows his devious nature. The Cricket Advisory Committee (CAC)  comprising such all-time greats as Sachin Tendulkar, VVS Laxman and Sourav Ganguly - is livid and has shot off a strongly worded letter that asks the BCCI to make everything public, threatening to do the same itself if the BCCI does not. The CAC has taken exception to the fact that Shastri agreed to have Zaheer on board and never talked about Bharat Arun when the committee spoke to him. They have seen it as an attempt to malign the reputations of the stalwarts in the CAC.

The committee wrote that "we spoke to Mr Shastri about getting Mr Khan and Mr Dravid on board in these capacities, and he readily agreed to the idea of having them in the set-up so that it would benefit the team and Indian cricket as a whole in time to come. It was only after getting Mr Shastri's consent that we also recommended Mr Khan and Mr Dravid, in their respective capacities." It said that "it has both pained and disappointed us, therefore, to see the light in which the CAC has been portrayed in various sections of the media." The letter went on to say that "it is our desire that you come public about the transparency of the process of identifying the next head coach so that the falsehoods are put to bed." Finally it said "as we have outlined, that (forcing Zaheer and Dravid on Shastri) is not the case, it is imperative that the cricket- loving public at large is made aware of the reality. We could do it ourselves, of course, but we don't want to further queer the pitch. So we would respectfully request you to clear the air and set the record straight in this regard."

As this writer had said in an earlier article a couple of days back, Shastri has the habit of speaking out of turn and trying to hog the limelight. He considers himself to be a superstar and a Mr Knowall. This is just the beginning. If the BCCI does not put a tight leash on him, Indian cricket may see more damaging controversies under his tenure.