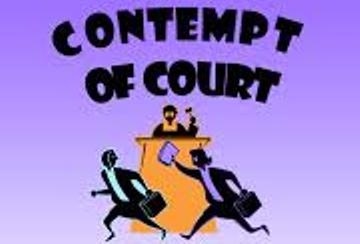 Refusing to Answer Questions is Not Contempt of Court

Refusing to Answer Questions is Not Contempt of Court

Editor-in-Chief of indiacommentary.com. Current Affairs analyst and political commentator. Writes for a number of publications. View all posts by this Author
Sub-section 3 of Article 20 provides that no person accused of any offence shall be compelled to be a witness against himself. It is a well established principle of law that no one can be forced answer questions in court that can be used later to incriminate him in another case. Ignoring this, the Delhi High Court had pulled up an accused for not answering question posed by it and initiated contempt of court proceedings against him.. In the case Kuldeep Kapoor vs Sushanta Sengupta, the accused Kuldeep Kapoor had allegedly submitted forged documents and false affidavits in court. Those affidavits provided false addresses. When the court asked him about the discrepancy, the accused remained quiet and refused to answer the question.

Taking this as an affront to the court that lowered its dignity and impeded justice, the court ordered contempt proceedings. But if the accused refused to answer the questions, he was protected by sub-section 3 of Article 20 of the constitution. Having allegedly submitted fabricated documents in court, if he had answered the question about the address, whether in the affirmative or not, he could have been pulled up under section 191 of the Indian Penal Code (IPC). So the accused was just refusing to be a witness against himself and hence, no contempt proceedings could be initiated only for that reason.

The Supreme Court was clear about this and hence dismissed the case in Kuldeep Kapoor and ors. vs Court on its own Motion in a very short order. While stating that the accused did not behave in a manner that could be construed as contemptuous, it also stated that proper notice was also not served on them under section 15 of the Contempt of Courts Act, 1971. While the apex court did not refer to the right under Article 20, it is implicit in the manner in which the court chose to set aside the contempt order. The court said we feel that the entire exercise done under the Contempt of Courts Act, 1971 was not proper and therefore we set aside the impugned order imposing punishment upon the appellants.