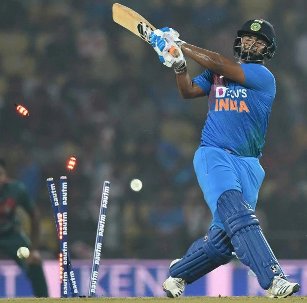 Rishabh Pant: Throwing Away the Opportunities

Rishabh Pant: Throwing Away the Opportunities

Rishabh Pant must be the most disappointed sportsman in India today. Despite getting numerous opportunities and the support of a majority of those who matter, he has allowed his impetuousness to make a hash of things every time he walks on the field. There is no doubting the talent - Pant has oodles of it. But in not recognizing that discretion is almost always better than valour, at least on the playing field, Pant has not been playing to his strength and has been trying to be someone who he is not and cannot be.

Consider the lazy shot to which he got out in the third T20 match against Bangladesh. It was as if he was in a hurry to get back to the dressing room. That, when the team needed a few quick runs to put up a fighting total on the board in a decider. He simply played an ungainly heave, a slog along the wrong line and was bowled. Pant has to realize that he is not a slogger. He is a talented batsman who has most of the strokes in the coaching manual plus a few of his own. He can do well with them in any situation. To make the situation worse, he makes far too many errors of judgment as a wicketkeeper.

But he tries to be fancy. He tries to do things that go against his nature. He tries to execute shots that are simply not there for the kind of balls he gets out to. It is increasingly becoming evident that Pant lacks character, determination and the will to succeed. Further, he does not appear to be a team man. Saurav Ganguly said just a couple of days that Pant will be OK if given time. But time is something that Indiaâs bench strength doesn't allow a player nowadays. KL Rahul is already doing well and can don the gloves to give the team an opportunity to include another specialist batsman. Otherwise, Ishan Kishan, Ankush Bains and Srikar Bhagat are waiting in the wings. Pant has to get his act together soon if he nurses the ambition to represent India for any decent length of time.