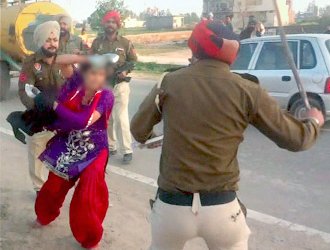 Anukriti is a student who dabbles in writing when she finds time. View all posts by this Author
A police constable has reportedly brutally beaten up a woman who accidently hit his motorcycle with her car in Jamnagar, Gujarat. The woman in question was Reeva Jadeja, wife of cricketer Ravindra Jadeja. Let us forget the degree of assault. Is it proper for a policeman  or anyone else for that matter  to raise his hand on anyone, more so if the person is a woman, for anything that happens accidently? The Oxford Dictionary defines an accident as an unfortunate incident that happens unexpectedly and unintentionally, typically resulting in damage or injury. If the incident is unintentional, then why the rage against the person involved?

Road rage has now become a given in India. It is not as if only the rich, famous, celebrities or influential people are involved. People living in jhuggi-jhopris, bustees or chawls are equally guilty. People have a very short fuse where road accidents are concerned. We recently heard about Navjot Singh Sidhu being given a reprieve by the Supreme Court in a road rage case where the man he assaulted died from the inflicted wound. Before that, Rocky Yadav, the spoilt brat offspring of a suspended JD(U) MLC Manorama Devi, and two of his friends were handed life terms in a swift trial for killing a person for overtaking their car. In Kolkata last year, residents of a bustee ganged-up to damage cars and other property in a multistoried apartment complex on mere suspicion that a car involved in an accident nearby belonged to a resident of that complex.

This is a highly disturbing trend. Psychologists say that there are a number of factors that induce people to indulge in this obnoxious behavior. But it seems that in India, an inflated sense of self-importance and the safety of anonymity when people from jhuggi-jhopris are involved, along with political backing, are the main reasons why such incidents happen. Sidhu was let of for the more serious charge of assault leading to murder for want of evidence  his lawyers managed to rubbish the testimony of witnesses. Rocky Yadav almost managed to escape being punished after eye witnesses, who were friends of the killed person, turned hostile (probably under political pressure) but for once the police nailed him with other evidence. The bustee gang in Kolkata is still roaming free  the police do not know whom to arrest.

But what happened in Jamnagar was reprehensible. Hitting a woman is a no-no at any time. It is all the more atrocious when the assaulter is a police officer. The matter hit the headlines only because Jadejas wife was involved. Who knows how many policemen beat up defenseless women on roads and the matter goes unreported. It is good that SP Jamnagar has admitted the involvement of the policemen and promised swift action against him and all help to Jadeja. The offending policeman should be tried in a fast track court and handed out the maximum punishment if found guilty. But who will help Reeva Jadeja in overcoming the trauma of being beaten by someone appointed to protect citizens like her?

image courtesy: India Today
This is a representative image showing a policeman thrashing a woman. It is not an image relating to the people involved in the subject of the foregoing article. The woman in the picture is NOT Reeva Jadeja and the policeman is not the one who beat her in Jamnagar.