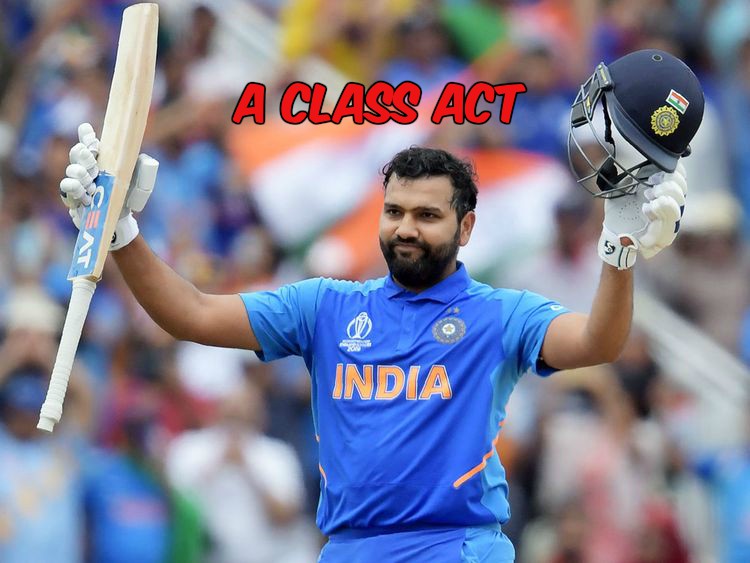 Rohit Sharma is on a roll. The talented and aggressive batsman seems to be enjoying the English weather and the pitches to the full. He has already hit 5 centuries in 8 games (which incidentally is a record for most centuries in a single World Cup, surpassing the 4 Kumar Sangakara scored in the 2015 edition) and if India wins the semifinal against New Zealand, he has two more games to add to the tally. The class he has displayed in the tournament so far has covered up the failures of the Indian middle order. Additionally, with K L Rahul playing the perfect foil in the opening partnership, India has not missed the experienced Shikhar Dhawan who has an awesome record in ICC tournaments played in England.

Coming back to Rohit, the way he is timing and hitting the ball, it seems that he can get out only if he is tired or makes a mistake. None of the bowlers have troubled him so far. The sequence of his scores in this World Cup so far reads: 122(144balls) against South Africa, 57(70) against Australia, 140(113) against Pakistan, 1(10) against Afghanistan, 18(23) against West Indies, 102(109) against England, 104(92) against Bangladesh and 103(94) against Sri Lanka. He has scored 647 runs in total till the group stage, which is the highest by any batsman in any World Cup till this stage. The only times he failed in this tournament was when he played on a regulation ball by Mujeeb Ur Rehman against Afghanistan and when Kemar Roach set him up to play a drive, only to be caught by Shai Hope against the West Indies.

The figures speak for themselves. Sachin Tendulkar took as many as 44 innings to score 6 centuries in all World Cups while Rohit has done it in 16. Only A B De Villiers has a better strike rate than him for batsmen who have hit 4 or more centuries in all World Cups. De Villiersâ strike rate of 117.29 is slightly better than Rohitâs 96.25. As far as most runs scored in a single World Cup is concerned, the record of scoring 673 runs, which Tendulkar scored in the 2003 edition, is likely to be broken by Rahul as needs just 27 to overtake that. For the record, Tendulkar took 11 matches to notch up the runs while Rohit, if he does it in the next match, will do so in only 9 matches.

Rohit Sharma has always been a class player in ODIs. In this format, he has an insatiable appetite for runs which is unmatched by any other current player. He is the only batsman to have scored three double centuries in ODIs which is not an easy thing to do. The rate at which he is going, he might break many more records soon. Saurav Ganguly has said that a player of his class should play more Test matches. Rohit has played only 27 Tests so far and has found that the selectors wield the axe on him for just one or two failures while less talented players are given far more opportunities. With his performance in the World Cup, Rohit Sharma has served a notice to the selectors. They will now find it difficult to ignore a player of his class for Tests. For, if Virat Kohli can succeed across formats, so can Rohit Sharma â provided he is given opportunities.