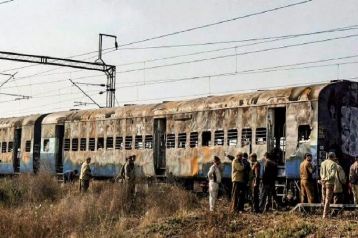 Samjhauta Blast Verdict: Is It Fair To Berate The Judge?

Samjhauta Blast Verdict: Is It Fair To Berate The Judge?

Editor-in-Chief of indiacommentary.com. Current Affairs analyst and political commentator. Writes for a number of publications. View all posts by this Author
All accused in the Samjhauta Express blast case have been acquitted by a special NIA court in Haryana. Judge Jagdeep Singh said that the evidence placed before him did not lead to the conclusion that the accused had either planned or carried out the blasts. Hence, he released Aseemanand, Lokesh Sharma, Kamal Chauhan and Rajinder Choudhary. The NIA chargesheet had named one Sunil Joshi as the mastermind of the blasts, along with four released now and Ramchandra Kalsangra, Sandeep Dange and Amit. While Joshi was shot dead in Dewas district in MP in 2007, the last three were never apprehended and are absconding. With the release of the quartet under prosecution, the question is who carried out the blast that killed 68 people, including 44 Pakistani nationals.

While the BJP has hailed the verdict as historic, the opposition has slammed the government for following double standards and not seriously pursuing cases against Hindu right wing activists arrested in several terror attacks. Pakistan has called the Indian envoy Ajay Bisaria to lodge a strong protest saying that it had repeatedly stressed that there was lack of progress and subsequent concerted attempts by India to exonerate the perpetrators of this heinous terrorist attack in which 44 innocent Pakistanis lost their lives.

Since the main chargesheet was filed in June 2011 and two supplementary chargesheets were filed in August 2012 and June 2013 (all dates during the tenure of the UPA), it needs to be studied how the case panned out from June 2011 to May 2014 and then after that when the NDA assumed power. It needs to be seen whether the NIA watered down the charges when the government changed color. There is no point berating the judge, as Mehbooba Mufti did in her tweet. She said that the accused were let off despite damning evidence. If there was damning evidence, there is little possibility that the judge would have acquitted the accused. The Indian justice system does not work that way.

The judge decided on the basis of evidence placed before him. Hence, what needs to be examined is whether the NIA either failed to collect conclusive evidence or failed to produce the same before the judge. Legal experts need to study the case in detail to find out how the prosecution pursued the case. For, if it is seen that nothing was done between June 2011 and May 2014, the blame will lie squarely on the UPA. The evidence is strongest in the initial days, whereafter it can be destroyed. Witnesses also have better recall closer to the event. It needs to be seen whether the NIA did enough in the initial three years to nail the accused.

After May 2014, it needs to be examined whether there was a substantial change in the attitude of the NIA. Did it start weakening the case by failing to produce evidence or arguing its case in a cavalier manner? Did it fail to examine witnesses that needed to be examined to pin the accused? It also needs to be examined whether judges were changed on a whim or for a reason recorded in writing. All this will be available in court records and can be accessed with the permission of the court. It is not correct to make unverified charges against the judiciary before examining how the case panned out. Also, this is not the end of the road for the case. An appeal can always be made in a higher court.