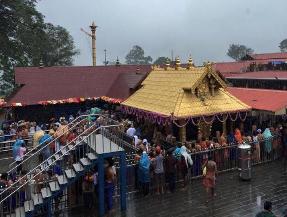 Editor-in-Chief of indiacommentary.com. Current Affairs analyst and political commentator. Writes for a number of publications. View all posts by this Author
The Supreme Court, by a 4-1 majority judgment, has ordered that the Sabarimala Temple in Kerala cannot prevent women between the ages 10 to 50 from entering the sanctum sanctorum. It has also said that devotees of Lord Ayyappa are Hindus and not any other religion. The court did not buy the argument that women within that age group menstruated and hence were impure to worship the deity. It was of the opinion that discrimination cannot be made against women just on the basis of physiological factors. The court also refused to recognize the practice of preventing women of that age group from entering the temple as being an integral part of religion.

It is true that given the myths surrounding menstruation, in the past Hindus used to consider it impure. There are hundreds of horrendous stories about the kind of discrimination and shame women had to face in those 5 to 7 days. In some homes, they were treated as pariahs and had to sleep, wash and eat separately. But that was an era when patriarchy ruled, education was limited and personal hygiene not so popular. In this age and time, it is criminal to think of menstruation as impure and to shame or discriminate against women for that.

The lone judge, who wrote a dissenting judgment, Justice Indu Malhotra, was of the opinion that it was not for the courts to decide which religious practices were to be struck down, except for social evils like Sati. She alluded to the fact that since Lord Ayyappa had manifested himself as Nastik Brahmachari at Sabarimala, the practice of restricting entry of women was essential religious practice, especially since the same restriction was not applicable at 1000 other temple of the deity.

But such discrimination, practiced on whatever grounds, is abhorrent. It should always be left to the individual belief of the person concerned. If women think that they should not visit temples during their periods, so be it. But temples cannot prevent them from entering. Further, such blanket bans prevent them from worshipping the deity even on days when they are not menstruating. It goes against gender equality and needed to be stopped.