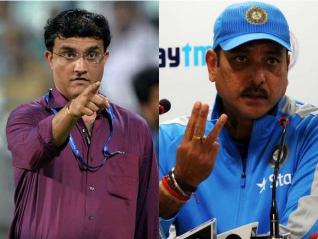 Editor-in-Chief of indiacommentary.com. Current Affairs analyst and political commentator. Writes for a number of publications. View all posts by this Author
Does anyone, it doesnt matter how big or famous a player he or she was in his or her own time, rubbishing another players achievements make that other player smaller? Or does it only reflect on the formers pettiness?

Piqued by Sourav Gangulys supposed rejection of his application to coach Team India, Ravi Shastri has chosen to snub him while waxing eloquent on the greatest cricket captains the Indian team has had. The occasion was the giving up of captaincy by the iconic Mahendra Singh Dhoni. Shastri called him a dada captain in an oblique snub to Ganguly, who is universally known as dada, the form of addressing an elder brother in Bengal.

Shastri is experienced enough to know that it was not Sourav Gangulys writ that ran in the four-member committee to select the coach for the Indian team. The other three members were Sanjay Jagdale, Sachin Tendulkar and VVS Laxman. Even if we leave aside Jagdale, it is preposterous to think Tendulkar and Laxman would let Ganguly dictate terms if they went against the interests of Team India. Hence, Shastri is wrong on picking upon Ganguly for his failure to make it as the head coach.

Further, Ganguly does not need certificates from the likes of Ravi Shastri for his contribution in making Team India a force to reckon with during his captaincy. Ganguly gave spine to a team that was labeled as losers before he took over. It was not the matter of winning or losing, it was the matter of playing the game with an attitude to win. Ganguly instilled self-belief in the team and that was a huge thing to achieve at that time.

Shastri is entitled to his blinkered opinion. But the fact remains that no article, thesis or book on Indian cricket captains will be complete without a big paragraph or chapter on the contribution of Sourav Ganguly. No amount of rubbishing by Ravi Shastri is ever going to obliterate what the record books say and what Sourav achieved. Shastri may not like it but chroniclers of Indian cricket will always seek Ganguly and write about his contribution in glowing terms as truth cannot be suppressed.

Ramesh Srivats, a cricket aficionado put it well on Twitter. He wrote about what recent captains had done to the Indian team thus:

Ganguly gave it a spine.
Kumble gave it a heart.
Dhoni gave it brains.
Now, Kohli is giving it guts.

It cannot be put better than this, whether Shastri likes it or not.