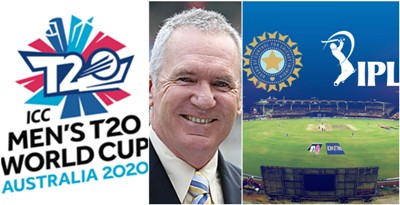 Sorry Mr Border, IPL Is Not Just A "Money Grab"

Sorry Mr Border, IPL Is Not Just A "Money Grab"

Australian cricketing icon Allan Border has said that IPL should not take precedence over a world event like the T20 World Cup and that the IPL is just a "money grab". His outburst against the Indian Premier League came after it was reported that in the event the T20 World Cup, to be held in Australia in October and November this year, is postponed, the window can be given to the IPL.

While one totally agrees with his contention that no club or franchise league can ever be allowed to have precedence over a world event, one feels that Border has got it completely wrong when he says that the IPL is just a "money grab". Border has either not seen the level of competition in the tournament or chooses to ignore it. He has also overlooked the fact that the tournament provides a platform for a huge number of cricketers from all over the world to hone their skills against quality opposition.

That is not all. The IPL provides livelihood to a huge number of people connected with cricket. Officials like umpires and referees, curators and groundsmen, among other persons, are all employed by the IPL and get a decent paycheck. Border is perhaps annoyed that the BCCI has emerged as the controlling power in world cricket because it gets huge revenue from the tournament. But he forgets that it has made the lives of cricketers all over the world much more decent and secure by providing them remuneration to which they are entitled.

If the fans in India watch cricket and make it the number one spectator sport in the country, thereby filling the BCCI coffers, Indiaâs clout will obviously be more. But the BCCI has always helped all the other boards (it provides funds to boards in distress like it recently did to the West Indies board) and Border should be grateful for that. Instead, he has a grouse against the BCCI for allegedly trying to run world cricket in a money-grabbing way.

The decision to postpone the World Cup will be taken only if Australia expresses its inability to hold it or if the travel restrictions due to the pandemic are not eased by then. But if the T20 World Cup is postponed and if the conditions in India are amenable to holding the IPL in that window, ideally there should not be any objection to it. It is not as if the World Cup is being postponed to allow the IPL. The two things are distinct from each other and if the former happens and if the BCCI is ready to hold the IPL, it should be allowed to do so.