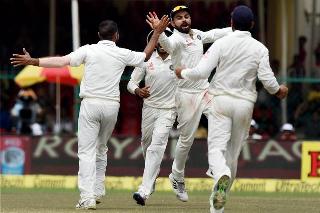 Yogendra is undecided whether he wants to be a writer. So he writes to see if he can be a writer. Ha Ha View all posts by this Author
In the end India beat New Zealand easily in the first Test of the three-Test series at Kanpurs Green Park stadium. The result was expected, given the relative inexperience of the New Zealanders on the spinning tracks in India. But the visitors need to be lauded for showing tenacity and taking the upper hand in the first five sessions of play and then again in the first session on the last day. They first bowled India out for a lowly 318 and then took their own score to 159 for the loss of just one wicket, raising the hope of an interesting match. But they succumbed to the wiles of Ashwin and Jadeja to lose 9 wickets for just 101 runs to give India a lead of 56 runs.

The Indians did not make the same mistakes in the second innings and pushed the score fast to gain a lead of 433 runs by tea on the fourth day. Set to make a record-breaking 434 to win the match, New Zealand lost early wickets and never recovered. This New Zealand team is dependent on their top four batsmen: skipper Kane Williamson, Martin Guptill, Tom Latham and Ross Taylor. The last named is sadly out of sorts on this tour till now. Guptill also looked off-colour in both the innings. Latham is coming to terms with Indian tracks. Only Williamson showed his mettle in the first innings but got out to a beauty from Ashwin. Surprisingly, the New Zealand late order, in the form of Luke Ronchi and Michael Santner are proving to be tough customers. They played well in both the innings, even putting up a rearguard action in the second in the face of certain defeat. Ronchi scored 80 and Santner 71 in the second outing, out of the total 236 scored by New Zealand.

For India, the main positives were that its spinners quickly got into the groove. The batting needs to be better. Virat Kohlis loss of form is a huge worry. But all in all, it was good beginning to the long season ahead which will see India play 13 Tests till March 2017.