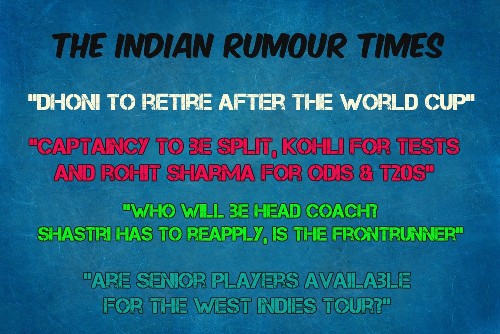 Who has a devious interest in the Indian cricket team? Who wants the team to break down? Who is spreading canards and casting aspersions on players? Who wants relationships between senior players to sour? Why is this misinformation being spread, who is spreading it and why is the mainstream media lapping it up?

First, rumours were spread when the team was in England that MS Dhoni would retire after the World Cup. The World Cup final (if India reached it) would be his final game for the team. Then, it was said that the selectors were thinking of splitting the captaincy, with Kohli being retained for Tests and Rohit Sharma being made captain for ODIs and T20s. Slanted reports were also strategically placed in the media about the selection of the head coach.

This is not good. The team has a full calendar in the next twenty-four months and will play all nations both at home and away. It is full of youngsters like Pandya, Bumrah and others who are trying to establish themselves in all formats. The performance of the team suffers when such reports come out in the media. As it is the BCCI is enmeshed in controversies. Now, if the team is dragged into such speculative reports, their performance might suffer.

The media should desist from publishing such reports. Hearsay and speculation may be good in political reporting or gossiping about celebrities. But when it comes to a national sports team the facts should be cross-checked from all available sources before such reports are published. The media is doing a great disservice to cricket by publishing such canards.