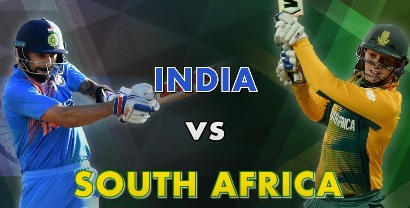 The Best Indian Cricket Team Ever?

The Best Indian Cricket Team Ever?

The Indian cricket team completed a whitewash of South Africa in the most clinical fashion. Winning a series 3-0 is tough at all times, but when the victory is achieved with huge margins it shows the opponent team in a very poor light. There is no doubt India excelled in all departments of the game in all the three Tests, but the South Africans were neither talented enough nor showed any character or resolve. That made the matches boringly one-sided.

Such was India's dominance that barring the first innings' of the first and second Tests, the South Africans could not cross 200 runs in any other innings. India won the first Test by 203 runs, the second by an innings and 137 runs and the last by an innings and 202 runs. The South Africans were bowled out in each of their innings while the Indian batsmen flourished on the home pitches.

The major difference was the quality and penetration power of the Indian pace attack. Despite having three world-class pace bowlers in Kagiso Rabada, Vernon Philander and L Ngidi, the South Africans failed to make any impact of the likes of Mayank Agarwal, Rohit Sharma, Virat Kohli and Ajinkye Rahane. In contrast, despite not having their best pacer Jasprit Bumrah around, Mohammed Shami and Umesh Yadav made short work of the inexperienced South African batsmen.

With this comprehensive victory, India has remained unbeaten at home for the last four years. This team, under Virat Kohli, has become almost invincible in Indian conditions. India is now at the top of the table in the ICC Test Championships with 240 points. With Bumrah set to return after his injury-induced layoff, the team should carry this momentum and prepare itself to win abroad and in all conditions. That will make it the best Indian team ever.