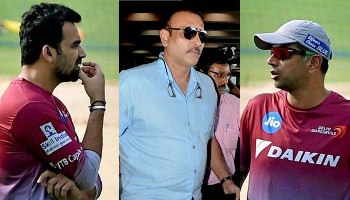 Editor-in-Chief of indiacommentary.com. Current Affairs analyst and political commentator. Writes for a number of publications. View all posts by this Author
Is there something about Team India head coach that makes it so controversial? A couple of days ago, Saurav Ganguly, speaking on behalf of the BCCI appointed Cricket Advisory Committee (CAC) (that has Laxman and Tendulkar, along with Ganguly, as members), announced that though the CAC had interviewed all applicants, the coach would be selected only after captain Virat Kohli gives his input. Then, on Wednesday, a section of the media reported that Ravi Shastri had been appointed head coach. The BCCI first denied the news and then confirmed it a couple of hours later. What was the need for such drama?

Ever since Greg Chappell conducted his unsavoury machinations during his tenure with the Indian cricket team, the position of the head coach is always under media glare. The outgoing coach, Anil Kumble, was also appointed after CAC member Saurav Ganguly had a very public spat with Shastri the last time around. Shastri was aggrieved as he thought he was best qualified. But Kumble had a tumultuous tenure. His partnership with captain Kohli seemed hunky dory on surface but lot of tension was brewing underground. In the end, Kumble resigned as he thought his relationship with the captain had become untenable.

In modern day cricket, especially with Team India, the role of the head coach is not limited to coaching. In fact, coaching is but a small part of the job, as players who have earned their caps just need the coaching to use their talent as per team requirements. The head coach is expected to clear the doubts surfacing in minds of some players, correct temporary flaws, induce discipline and set a training routine. Apart from that, the major job is that of strategizing. The last demands that the captain and the coach be on the same page. Kumble and Kohli were not. With Shastri rumoured to having a good relationship with Kohli, one hopes that he would be able to strategize better.

With Kohli as captain, Shastri as head coach, Zaheer Khan as bowling coach and Rahul Dravid as overseas batting consultant, one thinks that Team India has the best support staff at the top. But Shastri has a habit of trying to hog the limelight and speak out of turn. He is given to thinking that he is no lesser a superstar than current players. The BCCI should make it clear to him that he should maintain a low profile and get the job done, otherwise there would be another clash of egos.