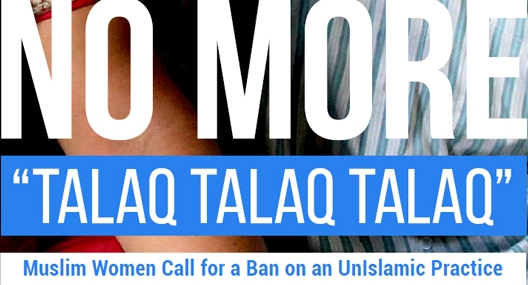 Triple Talaq to be Examined by Supreme Court

Triple Talaq to be Examined by Supreme Court

Editor-in-Chief of indiacommentary.com. Current Affairs analyst and political commentator. Writes for a number of publications. View all posts by this Author
The Supreme Courtâs decision to examine the custom of triple talaq in Islam is welcome. It has issued notices to the Central government and the National Commission for Women to file their responses in this regard. The court took this step on a petition by Shayara Bano and even sought a response from her ex-husband too.

The question of triple talaq has assumed great significance with technological advances. As Shayaraâs petition highlighted, women have been divorced over Skype and Facebook and have even been text-divorced. A conditional right given in Islam is being grossly misused by some men. There is no protection against this, mainly because of resistance against codification of Muslim personal laws.

The bogey that the courts have no right to pronounce on Muslim personal laws as they derive from the Holy Quran has been raised far too often to scuttle any attempts at reforms. There are several interpretations for the same Quranic Sura and people are known to misuse it. Despite the Quran having ample safeguards for women, vested interests deny them even basic rights.

Triple talaq allowed in Islam is not something that can be done spontaneously or in a cavalier manner. Muslim scholar Syeda Saiyidain Hameed has written that triple talaq is known as talaq-e-bidat or the talaq of wrong innovation. It goes against the spirit of Islam. She wrote that âduring the reign of the second Khalifa of Islam, Hazrat Umar, legend has it that there was a sudden spurt of talaqs in Arabia. Men were divorcing their wives without assigning any rhyme or reason. Angered by the inhuman manner in which people were interpreting the Koran, the Khalifa ordered that any man found giving his wife talaq should have his head severed. Allama Samsani of Beirut has cited this in Falsafa Shariat-ul-Islam. Triple, instantaneous, verbal talaq, in any event, is repugnant to the spirit of Islam. It has been called talaq-e-bidat which means `talaq of the wrong innovation'.

The clear instruction in the Koran is as follows: At-talaaqu marrataan: fa-imsaakum-bima`-ruufin `aw tasriihum-bi-ihsaan. Wa la yahillu lakum `an-ta`khuzuu mimmaa`aatay-tumuuhunna shay-`an `illaaa. Surah Al Baqr, 226. This means that talaq must be pronounced twice (in two months) and then (a woman) must either be retained in honour or released in kindness. Further it says, it is not lawful for you that you take from women anything which you have given them.

The commandment is clear. Talaq has to be pronounced twice with an intervening period in which to rethink, reconsider and reconcile. For this, the important instruction is to take time, and, once again, take more time, during which period there should be interlocutors from both sides to try to mediate the conflict. After the second talaq, there is still an intervening period, during which the husband has to think about the two choices available to him; either reconcile with his wife in an honourable way, or pronounce the third (irrevocable) talaq with kindness and allow her to go. At the end of the third interval, he must exercise this choice. But then follows the absolute command. If he decides to let her go, he must do so `without taking from the woman anything you have given her'. The spirit of the Koran vis-a-vis the process of divorce and the divorced woman, as reflected in this command to the man, is imbued with sensitivity towards gender.â

Pronouncing three talaqs at one go is neither sanctioned by Islam nor does it reflect the overall spirit of the Holy Quran. The recent assertion by Jamaat-Ulama-E-Hind that since Muslim personal law derives from the Holy Quran, Indian courts have no right to pronounce verdicts on such matters does not hold water because no single Islamic body is the sole and authorized interpreter of Quranic Suraâs. Further, the Supreme Court has time and again held that a practice cannot acquire religious sanction just because it is permitted and it can be regulated or prohibited in the interest of public order, morality and health (Khurshid Ahmad Khan vs State of UP). The state and the judiciary cannot be mute spectators when citizens are denied their rights in the name of personal laws whose authenticity or correct application is in doubt.