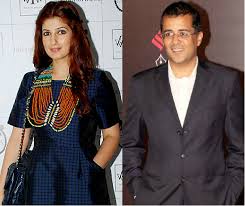 Editor-in-Chief of indiacommentary.com. Current Affairs analyst and political commentator. Writes for a number of publications. View all posts by this Author
Actor turned columnist Twinkle Khanna and author turned reality show judge Chetan Bhagat were involved in Ã¢â¬ËfriendlyÃ¢â¬â ¢ banter on twitter that somehow reeked of mutual disrespect. Of course both of them failed to realize that it is only their celebrity status that has got them their new jobs.

Although she writes decently, there are thousands of better writers who do not get to be five star columnists because they are not Rajesh and Dimple KhannaÃ¢â¬â ¢s daughter and Akshay KumarÃ¢â¬â ¢s wife. Chetan Bhagat knows a hoot about dancing but is still on the panel of judges in the dance reality show Nach Baliye. If they have delusions that they are in their new jobs because of competence or expertise, they need to consult a shrink.

Everybody loves a celebrity. Sadly, the media does too. Ms Khanna-Kumar had tweeted (as a put down to Chetan Bhagat) earlier that if she changed her name to Chetali Bhagat, her columns would have been made into films. I know it will upset her no end, but if she wrote as Chetali Bhagat, no one would have read her columns. There are too many MsNoOneFromNowhere writing columns that are not published, or not read if they are. It is only because the columns are written by the Twinkle Khanna that they are commissioned, published and read, at least by real and wannabe Page 3 people.

As for Chetan Bhagat, he has started taking his role as a glorified film scriptwriter too seriously to think he can judge dance reality shows. We all know that these are recorded programmes with teleprompters, and he says what they ask him to say. It is only because he is a celebrated author that he is there as a judge. Otherwise, with his one dimensional face and feminine voice, they will not even have him as one of the props.

At the end of the day both of them are just monetizing their celebrity status in a different field. They should be privately winking at each other instead of having a public spat on a social networking site like twitter. Bhagat ends with a tweet saying "Ok seriously guys, was just a fun banter with @mrsfunnybones. She is fun and has a sense of humour in her tweets. Silly to read more into it." Yes Mr Bhagat we will not read more into it as both of you are niether V S Naipaul and Paul Theroux or Salman Rushdie and John Le Carre that people will wait with bated breath for the next round.