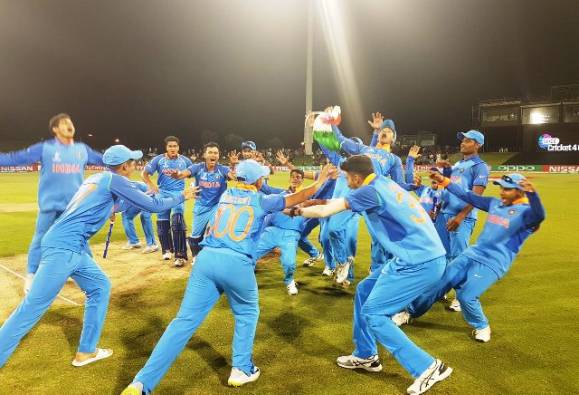 Editor-in-Chief of indiacommentary.com. Current Affairs analyst and political commentator. Writes for a number of publications. View all posts by this Author
The Indian under-19 cricket team, its coach Rahul Dravid and the support staff deserve all the kudos they are getting. The BCCI has done well to announce excellent sums as cash prize for the entire team. Winning the World Cup is an achievement in itself and winning it by remaining unbeaten is awesome. It speaks volumes for the effort, dedication, training and attitude of the entire team that no team came even close to being competitive, let alone beat them. They were superb in all departments of the game and raised the bar to a level where no one could catch up. The Australians were made to look ordinary in the final which India won very comfortably.

The Prithvi Shaw-led and Rahul Dravid-mentored team has an abundance of talent. It has the captain himself and Manjot Kalra at the top with Shubnam Gill and wicketkeeper Harvik Desai giving strong performances in the middle. It has three most fearsome fast bolwers in Kailash Nagarkoti, Shivam Mavi and Ishan Porel. It has excellent spinners in Anukul Roy and Shiva Singh. The boys are quite athletic in the field and are brilliant fielders. This is a team that is not dependant on any one star but works and clicks as a unit. That is Rahul Dravids biggest contribution. He has generated self-belief in each of these youngsters.

However, after the win Dravid has said that this win should not define their careers. Instead, he has advised the players to create bigger and better memories for themselves. This is a sane advice from a man who has been there and done all. Prithvi Shaw and company have the example of earlier junior players, especially world cup winning captain Unmukt Chand, before them. Fame, adulation and money can go to the head and lead to a burnout faster than the time it took them to win the cup. Not all can have a level head as Virat Kohli. Fame and money should be enjoyed but not allowed to go to the head. Hence, these youngsters should cut out distractions and focus on the game to be an asset for India for many years.