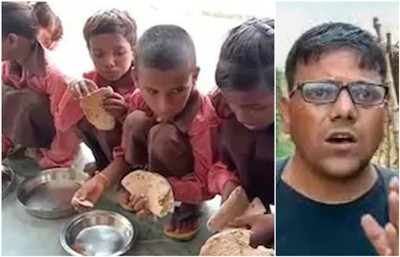 UP Administration Trying To Browbeat The Media In Roti-Salt Case

UP Administration Trying To Browbeat The Media In Roti-Salt Case

The UP government has booked Mirzapur-based journalist Pawan Jaiswal for criminal conspiracy in the roti-salt meal case that he reported from a government school at Siyur in the Mirzapur district of the state. Block education officer Prem Shankar Ram lodged the FIR against Jaiswal for trying to defame the state government by video recording the incident and giving it to a news channel for broadcasting. Ram said that after the video was broadcast, the administration had instituted an inquiry by a three-member panel headed by chief development officer of the district Priyanka Ranjan. The panel found that the main meal was under preparation and the children were given the roti-salt meal in the interim as it was taking time. The administration charged the journalist for providing false information without verifying the details.

Who is telling the truth? The fact is that the video clearly showed that the children were served only roti and salt. Jaiswal saw that and recorded it. His made a mistake in not verifying with the school authorities or taking a peek in the kitchen to see if something else was cooking too. He could have also asked the children whether they were served such a spartan meal every day or was it a rare occurrence. Journalistic ethics demanded that he should have investigated the reasons. But what he did was just record the video and sensationalized the issue.

On the other hand, the report of the inquiry panel cannot be taken at face value. Anurag Patel, the District Magistrate of Mirzapur, has stated on television that the report of the journalist was true and prima facie, the teacher in charge at the school and the supervisor of the gram panchayat were found at fault. Both were suspended by the district administration. But the block-level administration came up with the panel report saying that the main meal was under preparation when the video was shot and charged the journalist. It could be an effort to cover up the case and stop the government from getting a bad name.

But in all this, no one has thought it fit to ask the children if they were being fed with just roti and salt every day. That would be the clinching proof against the administration for mismanagement in the mid-day meal scheme.