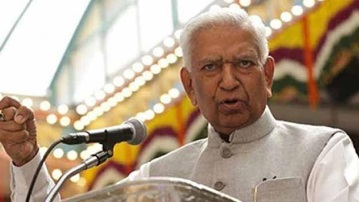 Vajubhai Vala, The Governor Of Karnataka

Vajubhai Vala, The Governor Of Karnataka

By our team of in-house writers. View all posts by this Author
People are talking about Vajubhai Vala, the governor of Karnataka who is under limelight as the people have not given any party the majority to form the government in the state. People say that it would be interesting to see what decision he takes. People are of the opinion that although Vala is an old RSS hand who once vacated his seat for Narendra Modi, he is now tasked with a constitutional responsibility and must do so impartially.

People also recognize that it was customary to invite the single largest party to have first shot at forming the government. But people say that the BJP had broken that in Goa and Manipur recently to form governments with allies despite the Congress being the single largest party there. Hence, people say, it is entirely upon the wisdom and discretion of the governor on whom he will invite first.

People also say that the numbers are stacked against the BJP as the Congress-JD(S) combine has 116 MLAs, enough for them to form the government. They also say that with just 104 seats, it is clear that the BJP will indulge in tod-jod or horse trading to cobble up the numbers. People say that that is undesirable. People say that there are already reports of disgruntled elements in both the Congress and the JD(S) who are unhappy with the alliance. People are sure that the BJP will feed on that, if it is invited first, to buy MLAs and prove its majority on the floor of the house.

People are of the opinion that the governor must do his maths right and prevent horse trading. People also say that the BJP must let the Congress-JD(S) combine form the government as their experiment is not going to last. It can then step in.