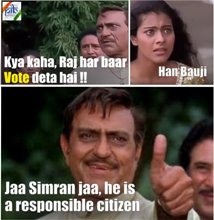 By our team of in-house writers. View all posts by this Author
People are talking about the efforts of the government to bring voters to the polling booths. It started with the Prime Minister tweeting very topical messages with the hashtag #VoteKar and tagging film stars, sportspersons, the media and other influencers by referring to their work.

When he tagged Ranbir Singh and Vicky Kaushal, Modi tweeted about apna time aayega and hows the josh to refer to the two latest films of the actors. Similarly, he said that people should create Total Dhamal at the booths when he tagged Anil Kapoor, Madhuri Dixit and Ajay Devgn to refer to their latest film. He also praised the sportpersons for their exploits and called them the voice the youth will listen to and asked them to spread awareness about #VoteKar. People say these were excellent efforts at encouraging people to vote.

Taking a cue from the PM, the Press Information Bureau (PIB) has also come out with a meme that puts voting-related dialogues for characters from the smash hit film Dilwale Dulhaniya Le Jayenge starring Shahrukh Khan, Kajol and Amrish Puri. People say that the ad will resonate with the youth and is an excellent departure from the dull and drab fare usually dished out by the PIB.

People say that since the general elections come once in five years and entail a huge cost, it is necessary that voters exercise their franchise in large numbers. That lends credibility to the exercise. They say that the governments efforts in this regard are exemplary and praiseworthy.