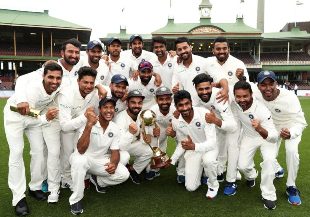 Editor-in-Chief of indiacommentary.com. Current Affairs analyst and political commentator. Writes for a number of publications. View all posts by this Author
Even as the Sydney Test petered out to drab draw, with rain playing spoilsport on the last day, India completed a historic series win in Australia. India won the series 2-1 and apart from a rare batting failure in the second Test, which was won by Australia, India completely dominated the series. In the Sydney Test too, the Australians were on the mat with having to bat out a whole day and a session on the fourth day after following on but they were saved by the weather.

It was a long 71-year wait for this achievement and the crowning glory is that it was achieved despite the captain and star batsman, Virat Kolhi, being uncharacteristically subdued and off-colour (he had just one excellent century in 7 innings, abysmal by his exalted standards) and the openers not getting it right in any of the Tests. The series showed that Cheteshwar Pujara in the most underrated Test batsman in India and he deserves more than has been given to him. It also showed that Indian bowlers (despite a strange habit of not getting the opposition tail out quickly) are now consistently capable of bowling out any side twice in a Test match. Jasprit Bumrah was simply devastating. It also gave a possible new batting star in Mayank Agarwal and allowed young Rishabh Pant to cement his place in the side in the absence of the recuperating Wriddhiman Saha.

The series was not without controversies  most ex-players commentating on TV and writing in the media were baffled by the constant changes made in the India line-up. The Kohli-Ravi Shastri team is known for not fielding the same team in two consecutive Tests. While many commentators feel that frequent tinkering with the line-up deflates player confidence, it has been working well for India and knowing both Kohli and Shastri, they will keep doing it despite the criticism.

Kohli termed the series- win as the proudest moment of his playing career. It goes without saying that it would have been a prouder and greater moment if the opposite captain was Steve Smith instead of the stand-in Tim Paine. But that does not take anything away from the Indian effort. They played like true champions and beat the Aussies in Australia, something which no Indian team, not even the 1977-78 team which played against an Aussie squad depleted by defections to the WSC of Kerry Packer and led by a brought-out-of-retirement Bob Simpson, had managed before them.