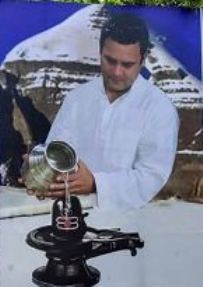 Why Doubt A Pilgrim's Word?

Why Doubt A Pilgrim's Word?

By our team of in-house writers. View all posts by this Author
People are talking about the controversy over Rahul Gandhis Mansarovar Yatra. People say that Rahul was not overtly religious in the recent past. But they say that perhaps the BJP push to consolidate Hindu votes have made him realize the importance of connecting with 80 percent of the population. Still, most people say they do not approve the trolling he was subjected to. When Rahul posted the pictures from Mansarovar, trolls said he had lifted them from the net. Why have doubts about a man on pilgrimage, people asked? Or is going on pilgrimage the sole preserve of Hindutva votaries?

But what people are not approving is the political mileage the Congress is trying to gain from the Yatra. People say that the posters popping up in Madhya Pradesh describing Rahul as Shiv bhakt and showing him pouring water over a Shiv ling with Mansarovar as backdrop are in extreme bad taste. Rahul went on the Yatra as a devout Hindu. If he wants it to get him votes, as per Hindu belief he is squandering whatever benefits the Yatra might have bought him.

People say that it is a sign of the times that Rahul Gandhi and the Congress have to show Narendra Modi and the BJP/RSS that they are more Hindu than them. People say that the Congress is trying to fight fire with fire, which is bad for the country. In any case, people say that worship and pilgrimage are personal things and should not be brought in public domain, least of all for seeking votes and certainly not by a party that swears by secularism and liberalism.