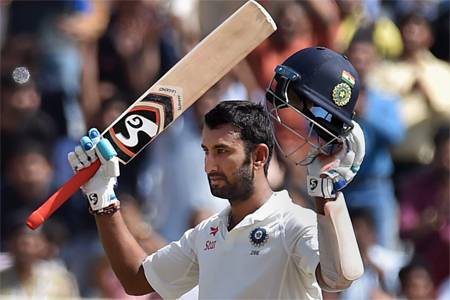 Will India Win the Ranchi Test?

Will India Win the Ranchi Test?

Editor-in-Chief of indiacommentary.com. Current Affairs analyst and political commentator. Writes for a number of publications. View all posts by this Author
What a day of cricket it was in the Ranchi Test today! It started with India precariously placed on 360 for 6 wickets, still 91 runs behind Australias first innings score. The plus point was Cheteshwar Pujara was still batting and Wriddhiman Saha was giving him company. That these two batted for two entire sessions is a tribute to their powers of concentration and application. Saha was a revelation as he blossomed in the company of Pujara and began to look as solid as his more fancied compatriot. Together, these two stitched a 199 run record partnership for the 7th wicket. Yet the match was evenly poised then and was headed for a draw. But Ravindra Jadeja had different ideas. He came in to bat at the fall of Pujaras wicket and scored a quick fire 54 off just 55 deliveries to put victory within Indias grasp. With India 152 runs ahead, Kohli declared to give his bowlers about 8 overs to test the Aussies. It was enough for Jadeja (it is turning out to be a fabulous match for him) to snare two wickets and Australia were reeling at 23 for 2 at stumps. With the pitch deteriorating fast, the Aussies will find saving the match a huge ask on the morrow.

The only period when the match seemed a bit dull was just before tea when Pujara was approaching his double hundred and Saha his hundred. For a while, it seemed both batsmen had downed shutters and the match was headed for a draw. But post tea, after they completed their individual landmarks, they perished in trying to push the score and Jadeja did what India required. If only Pujara and Saha had got to their landmarks earlier and India had got a lead of 200 runs, the Aussies would have definitely lost. Even now, they will be hard pressed to counter the treachery in the track. But with Smith in top form, Renshaw still there and Maxwell to follow, they might just bat the day to deny India a victory. Another highlight of the day was the complete amateurishness displayed by the Australians in taking the DRS. The one they took against Saha was very foolish. It was dictated more by the euphoria of Steve Smith having taken a brilliant catch rather than the demand of the situation. It was clear the ball had flown off Sahas shoulder/chest and there could not have been any glove on it.

I, for one, put my money on the Indian spinners, especially Jadeja, to polish off this Australian batting line-up on a supportive pitch. India will win the Ranchi Test and go up 2-1 in the four match series. It will perpetuate the statistics-backed thinking that in recent years, India wins most of the times when its spinners concede over 100 runs each in the first innings of the opponents. It will also perpetuate the thinking that at home, India is capable of winning matches even after conceding more than 400 runs to the opponents in the first innings.