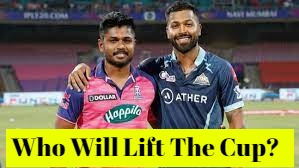 Will Jos Buttler Fire For RR Or Will David Miller Finish It For GT?

Will Jos Buttler Fire For RR Or Will David Miller Finish It For GT?

The adversaries of Qualifier 1 are to meet again in the IPL 2022 final at Ahmedabad today. Although Gujarat Titans (GT) have truly looked titanic in this edition and will have the support of one lakh plus wildly cheering home supporters, Rajasthan Royals (RR) are no pushovers despite their loss to GT the qualifier. Though Lucknow Super Giants must be ruing why they did not make the finals despite playing equally well in the tournament, the fact is that the two best teams are going it fight it out for the trophy and the cash prize today at the Narendra Modi Stadium.

Rajasthan Royals have the in-form Jos Buttler at the top of the order whose marauding blade this season has produced 824 runs at an average of 58.85 per match with 4 scintillating centuries. These have come laced with 78 fours and 45 sixes at a strike rate of 151.47. No one has come close to him and RR team director Kumar Sangakkara is mesmerized enough to proclaim that no one has batted better in IPL's 15-season history. On the bowling side, they have Yuzevendra Chahal, the unassuming but wily spinner who has already picked up 26 wickets at an amazing economy rate of 7.96. Chahal is not afraid to bowl in the death overs and such is his effectiveness that captain Sanju Samson is also not deterred from using him then.

For Gujarat Titans, David Miller has been doing the job of the 'executioner' in the last few overs. Such is his controlled power hitting that in a short span of six weeks, he has become the best finisher in the game. He has also not shied away from building partnerships and has always picked the right time and the right bowler to unleash his big strokes. He is someone who has brought immense value to the team. Then they have Mohammed Shami and Rashid Khan who have troubled most batsmen this season. Rashid Khan especially has been outstanding while picking up 18 wickets at just 6.73 apiece.

The final is going to be a great match with two equally strong teams giving their all to win the trophy. Both Hardik Pandya (GT) and Sanju Samson(RR) have displayed good leadership qualities throughout the season. Although GT have beaten RR both times in this year's tournament, maybe RR will turn the tables today. That can happen if one Jos Buttler decides to come up with another of his gems. But that will hugely disappoint the Ahmedabad crowd who will obviously want their team to win in its debut year. The match starts at 8 pm (IST) and will be broadcast live on Star Sports.