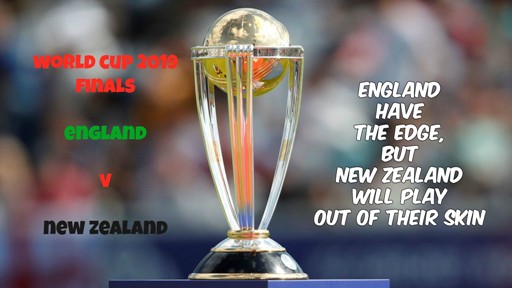 When England face New Zealand in the World Cup final on Sunday, one thing will be certain â the Cup will be lifted by a team that has not previously won the tournament. Both teams have equally balanced sides with England having the edge as their one-two-three position players are in devastating form whereas the New Zealand openers have consistently faltered in the tournament.

Arguably, in Jason Roy, Johnny Bairstow and Joe Root, England have the three most in-form and attacking players at the top, beating even Rohit Sharma, KL Rahul and Virat Kohli of India on current form. They have Eoin Morgan and Ben Stokes in the middle, ably supported by Joss Buttler. Their bowling is also potently spearheaded by Joffra Archer and Chris Woakes, with Stokes and Rashid ensuring that there is no let up in the middle overs.

New Zealand, on the other hand, is suffering from a crisis in the top order. Martin Guptill has had an atrocious tournament while Nicholls too is in indifferent form. Only Kane Williamson and to a lesser extent Ross Taylor has anchored the ship. But they excel in penetrative bowling from Trent Boult and Matt Henry whose efforts are supported well by Ferguson. New Zealand is also blessed with a superb fielding side which stops more than 30 runs and takes awesome catches.

England was the hot favourites to win the title when the Cup began. But they floundered initially only to get into the groove in the later stages of the tournament. It seems they have peaked at the right time. If they play to form, England will in all probability lift the Cup on Sunday but as their win over India showed, New Zealand cannot be taken lightly. My money, though, will be on England based current form, home advantage and public support.