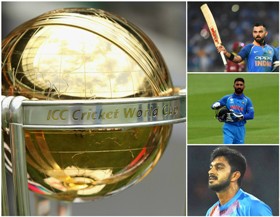 World Cup Squad: Bowlers Will Have To Deliver

World Cup Squad: Bowlers Will Have To Deliver

Editor-in-Chief of indiacommentary.com. Current Affairs analyst and political commentator. Writes for a number of publications. View all posts by this Author
The BCCI has declared the Indian team for the 2019 World Cup in England later this year. The big surprise is the inclusion of Vijay Shankar for the number 4 slot and the preference of Dinesh Karthik over Rishabh Pant as the reserve wicketkeeper.

The selection shows a fine balance with six batsmen, three fast bowlers, two wicketkeepers, two spinners and two allrounders, of whom one is a medium pacer and the other a spinner. The team will have the option of playing bowlers as per the pitch and the conditions.

One feels that the starting line-up for the first match should be: Dhawan, Sharma, Kohli, Shankar, Dhoni, Pandya, Kumar, Shami, Chahal, Yadav, Bumrah. The team can then take it up from there depending upon the performances of the players and the pitch and ground conditions. In any case, the Kohli-Shashtri duo always prefers horses-for-courses policy and seldom fields the same combination in two successive matches.

People might argue that Pant should have been included instead of Karthik and maybe Rahane should have made it in place of Shankar. But Pant, despite backing from several influential ex-players, lost out due to several gaffes behind the stumps in recent times. MSK Prasad, the chief selector, was blunt when he said that Pant could not be selected as his wicketkeeping abilities are not up to the mark. Remember, the World Cup will be played over the 50-overs format and Karthik is also known to play excellent cameos in this format and is way too superior as a wicketkeeper.

As for Rahane, despite his good record in England, once KL Rahul was selected as the back-up opener, there was no way Rahane could have got it. The selectors did well to bring in the young Shankar as he can also bowl good medium pace which can come in handy in English conditions. The fact that Shankar is also an excellent fielder is also a huge plus.

If one looks at the combination given above, the tail looks long and unproductive. Hence, it will be difficult for India if the top order doesnt fire. As it has been in recent times, India will look at its bowlers to win the matches. In Kumar, Shami and Bumrah, India has one of the most destructive and restrictive bowling attacks in the world at present. They are likely to relish the conditions in England. Chahal and Yadav also are strike bowlers who can choke any team in the middle overs. The best have been selected. Now it is upon them to perform to potential and bring home the Cup