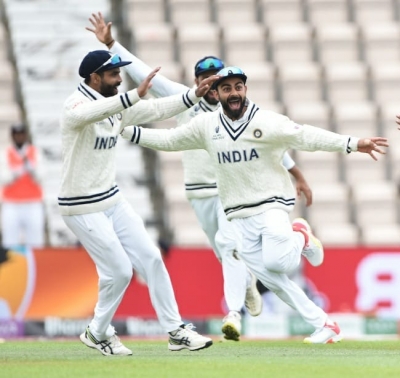 After five day, during which two days were completely washed out, the World Test Championships final between India and New Zealand at Southampton is poised for an enthralling finish on the 6th (reserve) day today. After New Zealand were all out for 249 in their first innings and gained a slender (but in this match it could turn out to be important) lead of 32 runs, they hit back and dismissed the Indian openers with India having scored 64, a lead of 32 runs.

Earlier on the 5th day, the Indian bowlers stuck to an exemplary line and length and did not allow the New Zealand batsmen any liberties. The pressure was enough to make them commit errors and India could bowl them out for 249. But the Indians gave away too many runs to the tailenders who used the long handle to good effect. This is likely to cause trouble for India as ideally India could have taken a slender lead after putting NZ on the mat at 162 for 6. Mohammed Shami was outstanding and took four wickets. He was ably supported by Ishant Sharma who took three. Jasprit Bumrah, though, was not his usual penetrative self on the day.

So with more than 90 overs of play on the last day, it is going to be a fascinating day's play. For India, Cheteshwar Pujara and skipper Virat Kohli are batting at 12 and 8 respectively. The conditions are favourable for the New Zealand pacers and if they can bowl out India within 150-175 runs by the middle of the post-lunch session, they can raise hopes of a New Zealand win. On the other hand, if India can manage to score anything above 225-250 by that time, they can put pressure on New Zealand. But given the way the match has progressed so far, both scenarios look improbable and a draw is the most likely result, unless India collapse inexplicably.