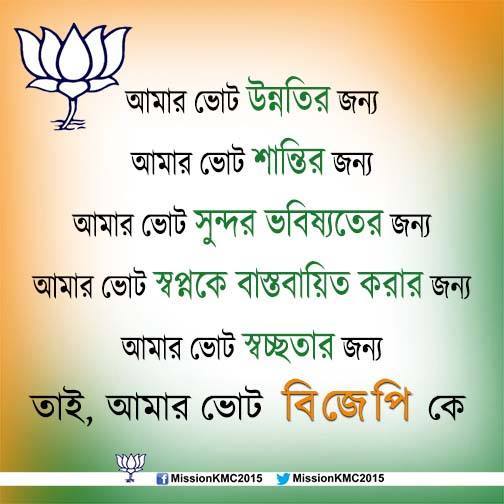 BJP Will Emerge as an Also Ran in Bengal

BJP Will Emerge as an Also Ran in Bengal

Editor-in-Chief of indiacommentary.com. Current Affairs analyst and political commentator. Writes for a number of publications. View all posts by this Author
West Bengal goes to the polls to elect representatives to municipalities and the Kolkata Municipal Corporation (KMC) next week. The ruling Trinamool Congress is upbeat. It has every reason to be so. It has already decimated the Left Front, including its leading light the CPI (M), and the Congress. West Bengal follows the policy of winner takes all, at least for the first few years of a change in regime. This was true when the Left Front first won in 1977. Immediately after its win, the state Congress was crushed and ground to dust. There was the Left all over the place. It took years for the Congress to regroup and start putting up a semblance of a fight. Even as it started showing some spine, Mamata Banerjee broke away to form the TMC.

When TMC won in 2011 after a long and often brutal opposition, it became the lord of all it surveyed. Its cadre captured CPI (M) offices, beat up its members and otherwise made it known that any opposition will not be tolerated and trampled upon by boots, if not bullets. CPI (M) and Congress members started joining the party, both to escape retaliation and to dip their hands in the basket of power.

Amidst all this, the 2014 general elections happened and even West Bengal was touched by the so-called Modi wave. The BJP did not win many seats but dramatically increased its vote percentage to over 15 percent, causing lines on the foreheads of many TMC leaders. It was generally believed that the BJP had emerged as the new opposition in the state.

But, in the run up to the municipal elections, all this is not visible on the ground. The verbal sparring over Saradha and CBI notice on income details apart, the TMC looks all set to win most, if not all, of the municipalities, including the KMC.

The main reason is that the state BJP has flattered to deceive. It does not have any recognizable state leader Ã¢â¬" elections are not won by the Rahul Sinhas of this world, not when the opposition has Mamata Banerjee in their dugout. It does not have a grassroots organization which is a must if one wants to win elections in West Bengal because the ruling party deploys extensive muscle power that needs to be countered. Its inexperience was exposed when its face for the KMC, Roopa Ganguly, failed to file her nomination due to a technicality. Mamata was able to conquer the red fort only because she could match, and even better, their muscle and lung power. BJP is outclassed in this department. Its selection of candidates has been atrocious, causing infighting and ugly scenes in front of its state headquarters which gave it a very bad publicity in the run up to the elections.

The BJP has to admit that it is out of its depth against the TMC. If it is thinking that these are just local body elections and it will unleash Modi power in 2016 to win the state elections, it is sadly mistaken. For, when it does not have known candidates for local elections, it will have even worse candidates for state elections. It has, like the other opposition parties in the state, failed to capitalize on the shortcomings of the TMC Ã¢â¬" the Saradha scam, the benami contributions to the party and the infighting Ã¢â¬" to let the TMC get off the hook. It is now clear to observers that the BJP has a long haul before it can even think of dislodging the TMC from power.